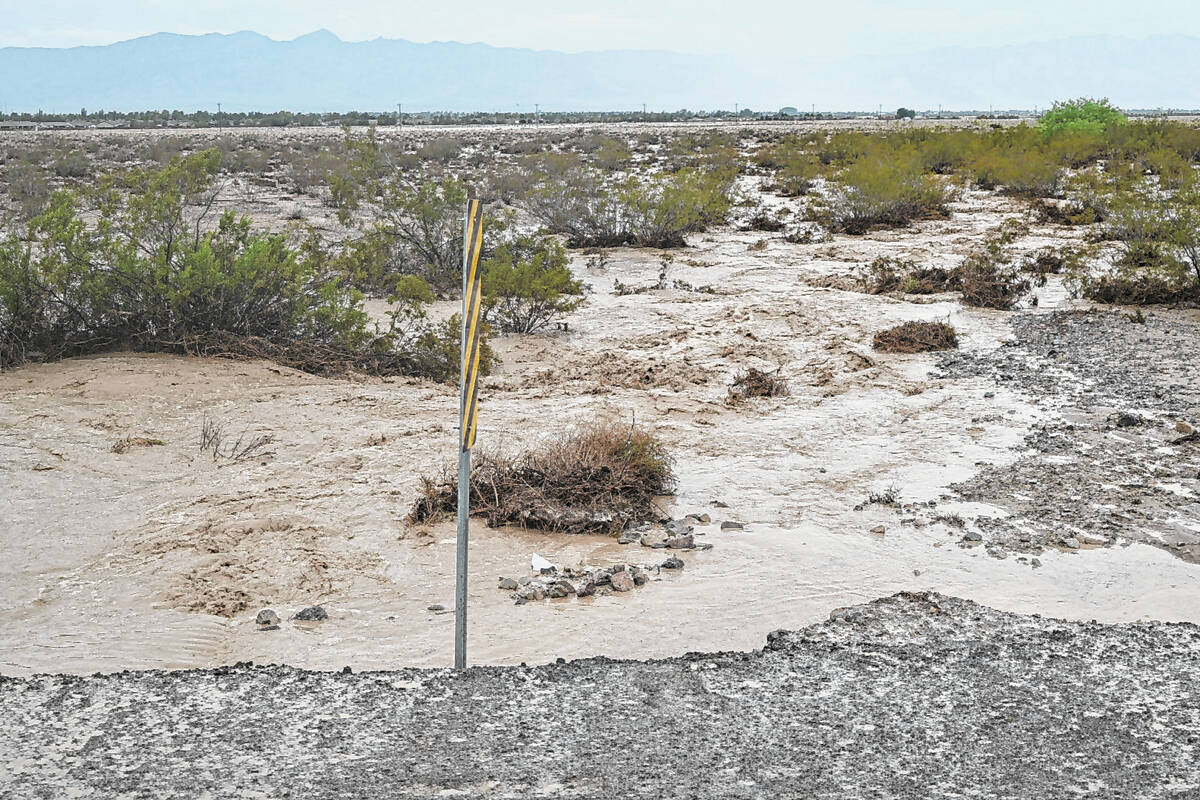 Flooding is seen in the area of Gamebird Road and state Route 160 in Pahrump on Sunday, July 31, 2022. (Pahrump Valley Fire and Rescue)

“We had severe flooding in the area of the Spring Mountain Motorsports facility that went over Highway 160 and temporarily closed it for about an hour and a half,” Lewis said. “It then went down Gamebird Road to Homestead Road. As of midnight, crews were still out doing assessments to properties and roadways. During the course of the more severe flooding, crews completed two swift-water rescues. They also recovered a vehicle that was well underwater blocking a culvert in the area of Fox and Gamebird.”

“Crews worked with NHP, the Nye County Sheriff’s Office and Public Works for multiple hours, as part of Emergency Management,” he said. “Similar types of issues with flooding roads were in Beatty, Round Mountain and Tonopah where crews were dispatched for the removal of six people in one vehicle stranded in waters. It really did involve the entire county, so we weren’t isolated. There were a lot of great responses by the first responders and they all did a great job. They were on standby to protect their respective areas.”

Though much of the rainfall occurred in the mountains and foothills around the Pahrump Valley, Lewis noted that a lot of the flooding occurred as a result of rain falling throughout the south end of the valley floor.

“In this particular case, we also had heavy rainfall within the valley in that same area that the flooding initiated, so we had a strong cell not only up in the mountains, but it was reinforced by a strong cell over the south part of the valley, so the torrential rains at the time that the flooding occurred was exacerbated. I also want to extend thanks to some of our storm watchers, including John O’Brien, who was helpful in getting some reports to us so we could keep track of the cells and stuff like that.”

More than an inch of rain fell in a very short period of time on Sunday, which mirrored last July’s storm where rainwaters inundated homes and stranded drivers along flooded and debris-strewn roadways in and around Pahrump.