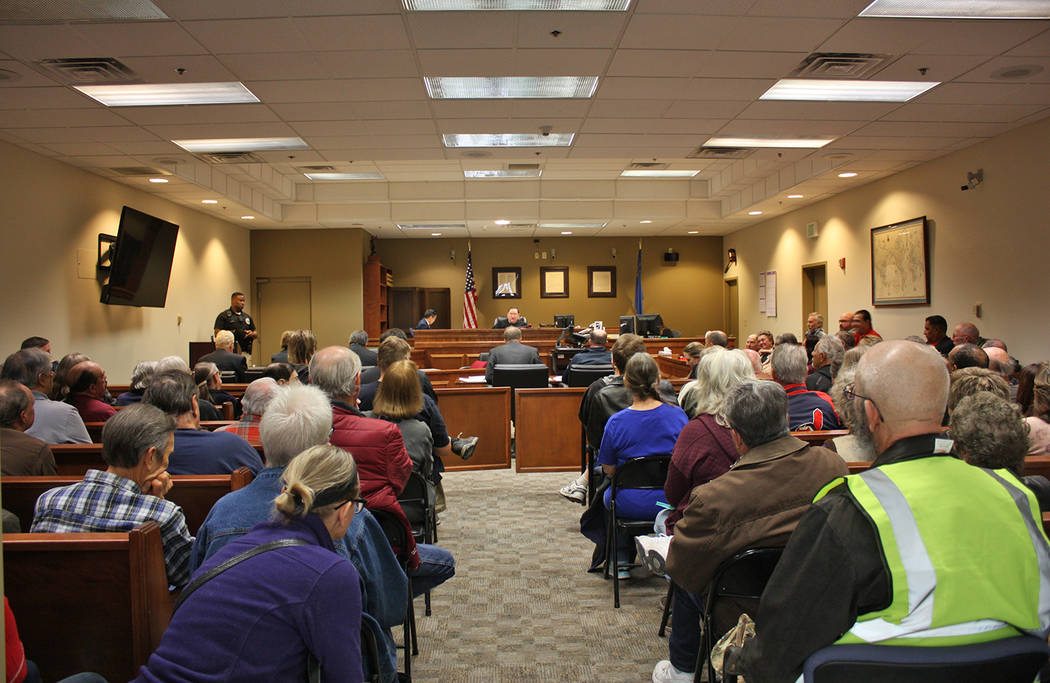 Robin Hebrock/Pahrump Valley Times Judge Robert Lane presided over the first hearing in Ed Goedhart's Assembly appointment lawsuit on Jan. 8 and a huge crowd gathered to observe. The room was so full that Lane opted to open the jury box and provide additional chairs to accommodate the large audience. 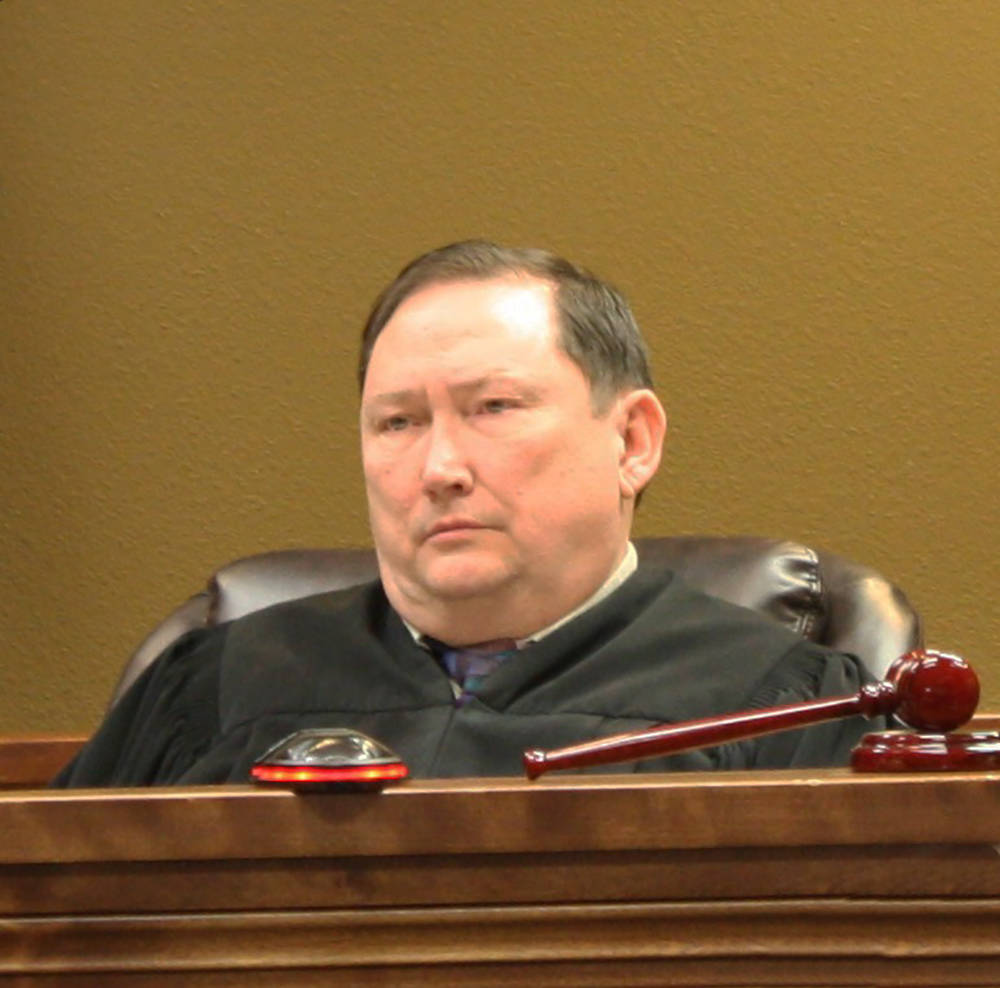 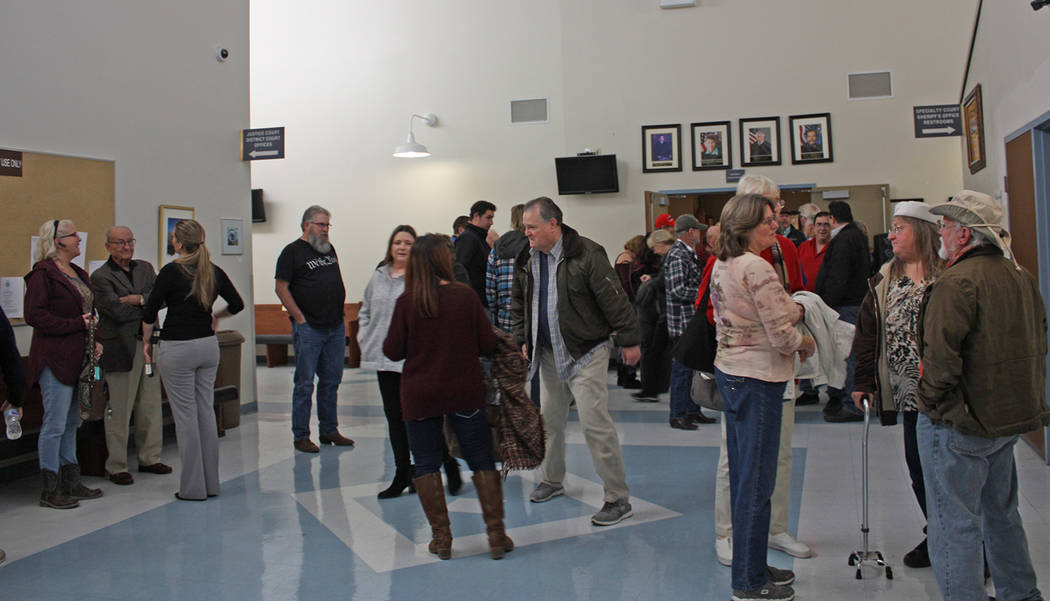 On Tuesday, Jan. 8, Fifth Judicial District Court Judge Robert Lane denied a motion for injunctive relief in the case of Ed Goedhart versus Nye County, regarding the appointment of a person to hold the late Dennis Hof’s Nevada Assembly District 36 seat.

This is not the end of the matter however, with another hearing set for Feb. 4 to address the county’s motion to dismiss Goedhart’s complaint for declaratory relief.

In his motion for injunctive relief, Goedhart requested that the courts vacate the appointment of Greg Hafen II to the Legislature by the Nye, Clark and Lincoln county commissions, which took place on Dec. 7, 2018.

Goedhart’s main claim is that he, as a voter of Nye County, is entitled to be represented in the matter of the appointment.

His lawsuit asserts that as the newly elected commissioners for Nye County were not part of the appointment process, he did not have true representation because the incoming commissioner for his district had not been seated when the decision was made.

In its opposition to Goedhart’s motion for injunctive relief, Nye County asserts that Goedhart’s request is moot due to the fact that the appointment has already taken place. This was one point on which Judge Lane apparently agreed.

Goedhart also argued that the county had no authority to make an appointment when it did, citing his belief that the vacancy did not become official until Jan. 7 when elected officials across the state were sworn into office. However, Lane differed in his reading of the law, remarking that he believed the vacancy occurred the day following the 2018 general election.

“Article 4, section 3, subsection 1, the members of the Assembly shall be chosen biennially by the qualified electors of their respective districts on the Tuesday next after the first Monday in November and their term of office shall be two years from the next day after their election. So Mr. Hof’s term started the day after the election, according to the Nevada Constitution,” Lane stated during the hearing.

When making his ruling, Lane concluded, “I agree with them (Nye County) that the issue is moot now, since the choice has already been made. I believe that if you prevail at the declaratory stage, there is a remedy you can pursue… which would be to ask the new commission to, at that time, make the new choice. So I agree that it is moot, I agree that there has not been irreparable harm shown.”

Lane declined to make a ruling on other arguments presented that morning, instead reserving them for a future hearing.

These included the question of Goedhart’s standing to bring such a lawsuit and the issue of possible failure to name necessary parties, such as the other two county commissions involved in the appointment process.

The issue of attorney’s fees was also reserved. Each of these matters have been put off until the February hearing to address the county’s motion to dismiss.

“The county is pleased that the judge found enough merit in the county’s argument to deny the request for injunctive relief. We look forward to the February hearing on the motion to dismiss,” Nye County Public Information Officer Arnold Knightly stated following the hearing. “As the three counties involved have held, and Judge Lane stated today, the state Constitution indicates the vacancy started the day after the election, so Nye County was obligated to move forward with the selection process.”

Goedhart was obviously disappointed by the result of the hearing and noted that he feels taking the matter further could prove difficult due to the cost of pursuing legal remedy.

“The hearing today was attended by many of the disenfranchised Nye County voters whose presence showed support for my lawsuit against the unlawful actions of the outgoing Nye County Board of County Commissioners in the process to replace Dennis Hof. However, it becomes a very expensive process to fight city hall (the county) and the court did not grant our petition for injunctive relief,” Goedhart said. “With an unlimited taxpayer-funded checkbook, Nye County clearly has the upper hand moving forward.”

Regardless of this, Goedhart said he plans to continue pressing his case. “In speaking with my legal team… the consensus was that… there are excellent grounds to continue the lawsuit. I have received hundreds of phone calls, texts and emails from Nye County voters encouraging me to press on. After careful consideration, I have instructed my legal team to press forward in our pursuit of justice,” he stated.

The hearing on the county’s motion to dismiss is set for Feb. 4 in Pahrump. Lane noted that once that hearing is complete, the courts could look at scheduling a hearing on Goedhart’s complaint for declaratory relief.