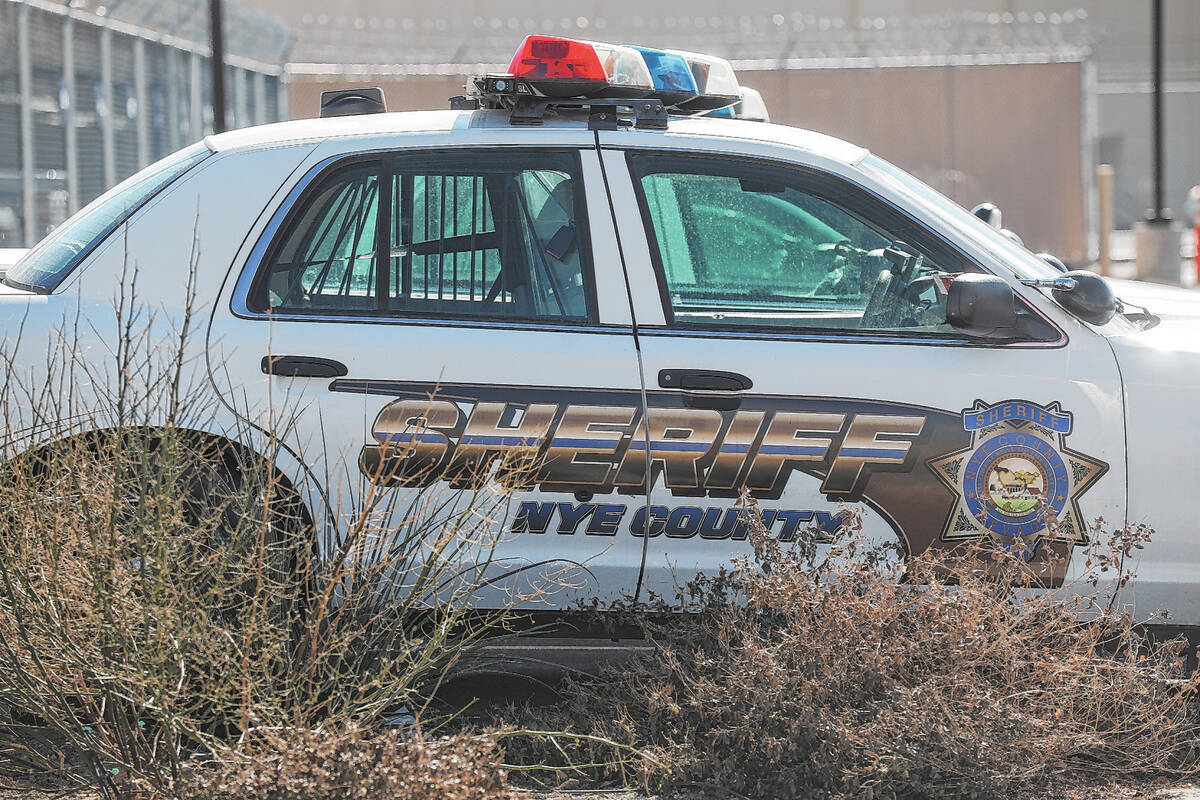 A Nye County Sheriff’s patrol car in the yard behind their offices on Wednesday, Jan. 19, 2022, in Pahrump, Nev. (Rachel Aston/Las Vegas Review-Journal) @rookie__rae

Pahrump Valley Fire and Rescue Services crews were dispatched to the parking lot of Albertsons for what was reported to be a dead person inside of a vehicle on Friday afternoon Dec. 23.

Pahrump residents Pat and Curtis Watson made the grim discovery while going shopping at Albertsons at approximately 2 p.m.

Pat Watson said that when she and her husband arrived at the store, they pulled into the parking space next to the woman and noticed that she was slumped against the window of the driver’s side.

“She had gorgeous hair and that’s what got my attention because she had beautiful hair,” Watson said. “I was wondering if she was sleeping and then I heard the engine running and thought it was strange.”

Watson also said that she told her husband something didn’t seem to be right with the situation.

The couple then went inside the store where they completed their brief shopping errand and returned to their car, where they noticed that the woman was in the same position.

Watson said that she began to pound on all of windows of the car but there was no response from the woman.

Additionally, at the same time, a Nye County Sheriff’s Office deputy was investigating a shoplifting incident inside Albertsons, and was alerted to the scene by Watson’s husband Curtis.

“The deputy came out and started knocking on all of the windows but she was not moving so he called for more deputies and the fire department to respond,” she said, “and all of a sudden this young boy sits up in the backseat. He must have been sleeping.”

The boy was severely autistic and could not properly communicate with the first responders, according to the sheriff’s office, which is investigating the cause of death, Pahrump Valley Fire and Rescue Services Chief Scott Lewis said.

Also on Friday, Dec. 23, emergency crews were dispatched to the intersection of Vineyard and Winery roads for a serious two-vehicle collision at approximately 8 a.m.

“As I arrived on location, I found a two-vehicle, head-on collision,” Lewis said. “While there was no entrapment, both parties were injured and transported to the local hospital.”

Later that day, fire crews responded to an injury motor vehicle accident in the area of Money Street and Kellogg Road just after 4:30 p.m.

“This involved an off-road vehicle,” Lewis said. “The rider sustained multi-system trauma and was transported to Mercy Air and subsequently flown to UMC Trauma.”

Lewis said the accident was witnessed by an individual who immediately called 911.

“This also involved an off-road vehicle,” Lewis said. “The driver sustained injuries consistent with flight and that patient was subsequently transferred to Mercy Air and flown to UMC Trauma.”

Chief Lewis also spoke about an increased number of respiratory emergency service calls that EMT crews have responded to over the past several months around the valley.

“It’s influenza season, plus RSV is out there and COVID-19, so it’s a combination of all three that are causing havoc,” he said. “And not only that, but now that we’re getting more moisture in the air and that also hurts our lungs because they start filling up with fluids. They’re used to dry air, but now there’s moisture in the air and it can cause more havoc so they just can’t breathe well. It’s like an exacerbation of Chronic Obstructive Pulmonary Disease, which is known as COPD.”