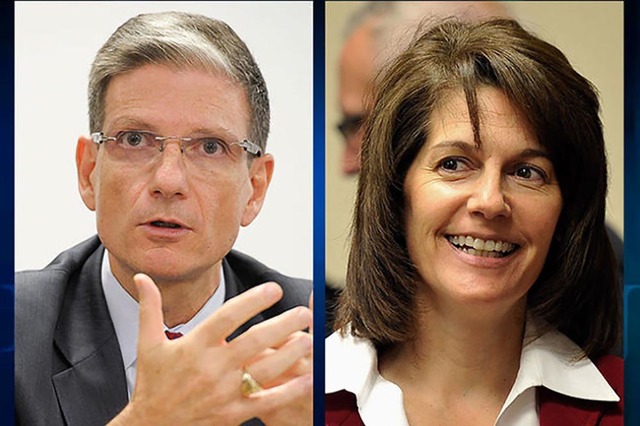 U.S. Rep. Joe Heck, R-Nev, and former Nevada Attorney General Catherine Cortez Masto face off in a one-hour live TV debate tonight at 7 p.m. They are seeking to fill the U.S. Senate seat being vacated by the retiring Harry Reid. Special to the Pahrump Valley Times

The debate is televised live across Nevada and broadcast on KLAS-TV, Channel 8, the Las Vegas CBS affiliate; and on KTVN-TV, the Reno CBS affiliate.

The debate will be aired live on C-SPAN. Nevada Public Radio, KNPR, also will broadcast the debate live.

KINC-TV in Las Vegas and KREN-TV in Reno, both Univision/Entravision affiliates, will air the debate at 5 p.m. on Sunday. They’re airing it later because the event will be translated into Spanish.

The debate will be streamed live on lasvegasnow.com, ktvn.com and noticiasnevada.com.

The debate is not open to the public.