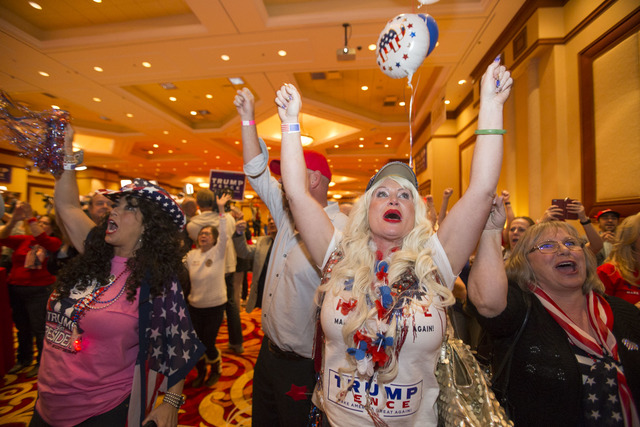 Las Vegas resident Stephanie Smith, second from right, and others as Donald Trump is announced President during an election night event hosted by the Nevada Republican Party at South Point hotel-casino on Tuesday, Nov. 8, 2016. Richard Brian/Special to the Pahrump Valley

It’s Sunday morning at 9 a.m. I can faintly hear gunfire in the distance from Front Sight. Closer, I hear engines accelerating and then decelerating as cars race around the track at Spring Mountain.

The sun is warm, the air still, and the desert fall is blessing Pahrump with another glorious day.

Over my second cup of coffee, I am reflecting on a conversation with one of my cousins I had last week. She fits squarely in the demographic of the Democrat’s target market. She is college educated, a liberal arts major, a full-time elementary school teacher, and lives in California.

What started our conversation was a comment I made on social media to my friends and family members regarding some of the outrageous reactions to Trump’s election.

I was especially aggravated at the reaction from the CEO of GrubHub, a dot-com company that wrote in an email to his employees that if they voted for Trump they should resign because they were not welcome at Grubhub. Frankly, I was stunned that an employer would threaten their employees with such a tactic.

These companies like to think of themselves as forward-thinking and all-inclusive but in fact, they are nothing more than a hypocrite. The reality is they are all-inclusive as long as you agree with their political ideals and if you don’t, you should be kicked to the curb because you dare to disagree with them.

Countries that we consider corrupt and that disregard personal rights and freedoms tell you who to vote for. To try and control someone’s vote by threatening their jobs makes them the same as those dictators and countries that they claim to despise. The orderly transition of power is a foundation of our free and democratic political system. We may disagree strongly with the outcome of an election but as a free democratic society and country we owe the elected person an opportunity to earn our trust and not dismiss them completely.

My cousin was the only person to speak up and give a half-hearted defense of Grubhub’s CEO. She said he handled it poorly but she thought his intent was to defend Muslims, Hispanics, and women, who she believes are going to be trampled by a Trump administration. She says “as a woman” she is truly afraid of losing her rights and equality under Trump. She then sent me a repost from someone that states “those who voted for Trump now have a responsibility to hold him accountable. We say that we don’t agree with his remarks about women, that we too are offended by many of his comments in general. That we now must make him change his points of view.”

Any normal rational thought process would be to understand that he is not going to take away women’s rights or deport legal citizens of any ethnic origin or religion. But none of this is apparently normal or rational to my cousin. Common sense has once again left us.

Her hysteria over Trump and the election, no matter how illogical, is very real to her. Her perception that the world has come to an end is fueled by the media’s constant display of anti-Trump protestors and commentary while displaying a disregard of the facts. He is the next president.

It’s an eye-opening to look at a map of the election broken down by counties and cities. The Democrats won the urban cities, especially along the coasts and areas with minorities. Every other section of the country voted for Trump. Trump also received more votes from minorities than the last Republican candidate.

“Cousin, we have survived 44 presidents to date. Trump will not be as bad as the left will have you believe no more than Hillary would have been as bad as the far right would have us believe. As both Clinton and President Obama have stated, we owe him an opportunity to unite this country. If he is truly as awful as you think, it’s likely he will be easily defeated four years from now. What bothers me is that the ‘tolerant’ left is not tolerant and is behaving in exactly the way they accuse the right of. The World did not end.”

The last message from my cousin to me; “You speak the truth.”

Maybe common sense, reason, and logic have a chance after all.