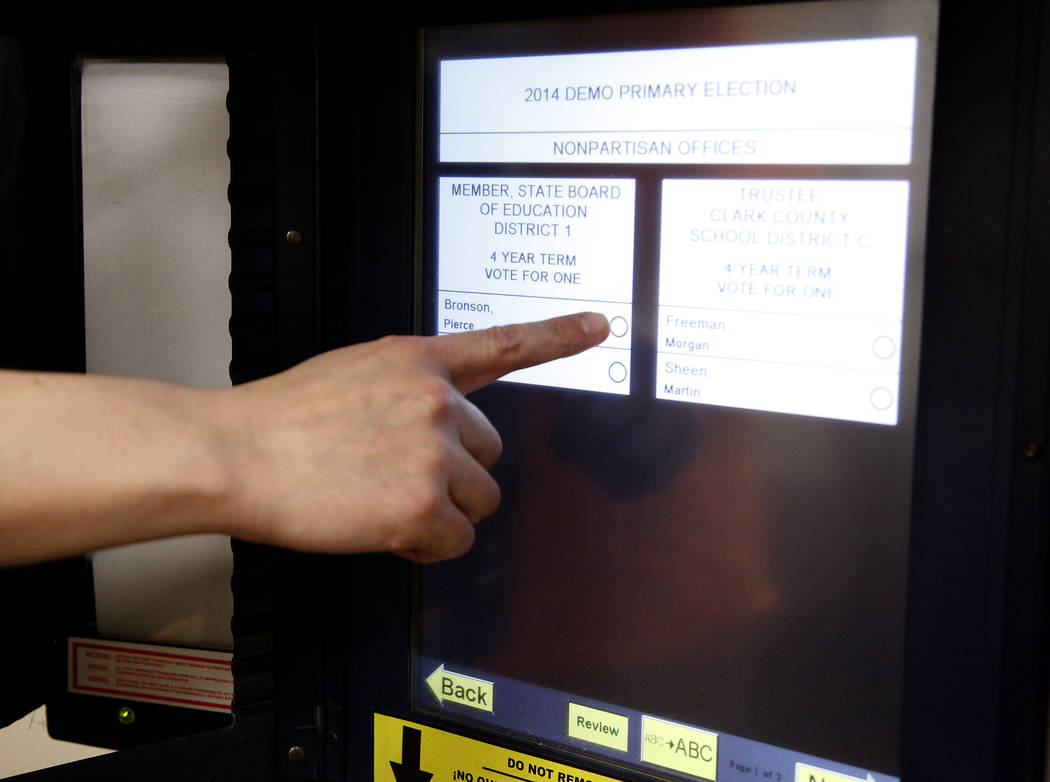 Las Vegas Review-Journal Dennis Myers follows up on his earlier column that looked at claims of polling place voter fraud and how rare such incidents are.

In August, I wrote about claims of polling place voter fraud and how rare such incidents are (“Looking into that old voter fraud claim,” PVT, Aug. 15). Not everyone agrees, but an incident brought to my attention by our editor provides more evidence.

Last week in Columbus, Ohio’s precinct 49-B, a voter cast her vote for governor and then noticed that on the paper printout of her vote, it was recorded for a different candidate. She shot footage of the electronic screen and the paper ballot and later posted them on Facebook with this message: “Just voted. And guess what? I selected [Republican nominee for governor Mike] DeWine and on the side print it came up [for Democratic candidate Richard] Cordray. I was VERY vocal. I asked how many people voted on that machine and 18 people had voted on it. So that was 18 votes for a wrong candidate?”

The posting came to wide attention and a number of caustic comments toward Democrats were posted. But here’s the part the voter did not report on Facebook: When she reported the problem, the machine was taken out of operation and she was led to another machine to cast her vote there. A paper jam was later identified as the culprit. No evidence was found by representatives of BOTH political parties that the glitch represented any broader problem.

Because of the nature of voting machines, there has long been the possibility of votes being cast for the wrong candidate. It even happened on early mechanical voting machines. So they are monitored for just this problem.

Nevada had an encounter with the problem in 1970 at a Henderson precinct. In a state Assembly race, Democrat Arthur Espinoza defeated Republican Hal Smith by just 16 votes. Smith contested the election before the Legislature based on claims of a faulty voting machine. The machine was taken to Carson City where, on Jan. 18, 1971, a special committee saw that votes cast for Smith were recorded for Espinoza.

Committee Democrats and Republicans concluded that the machine recorded only eight of 60-plus votes for Smith. Espinoza agreed and resigned, and the Assembly seated Smith.

In Ohio, as in 1970 Nevada, the system worked as it was supposed to. In both cases, bipartisan cooperation prevented problems, though there were plenty of people outside the system willing to assign sinister motives.

The Ohio incident also demonstrates the usefulness of voters being able to photograph at the polling place.

Some Nevada election officials say this is illegal, but all I have been able to find is a state administrative regulation saying that an official election observer cannot use “a mobile telephone or computer within the polling place.” Cameras should be allowed in the interest of public confidence in elections.