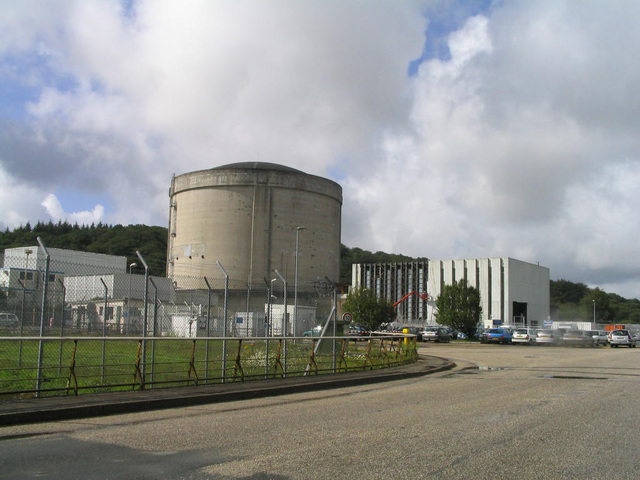 Nuclear power plant at Brennilis, France. The country obtains 75 percent of its total electric power production from nuclear reactors, the highest of any nation. Some 39 percent of France’s total energy consumption comes from nuclear. Courtesy of Loïc - Self-published work by Loïc, CC BY-SA 3.0

The time is not that far off when the nations of the world will begin making significant changes in their sources of energy. Use of renewables and nuclear power will go up dramatically, and use of fossil fuels will be cut way back.

Residents of central Nevada and Nye County can take advantage of these coming historic changes.

I propose an organization be created whose purpose will be to promote the development of nuclear power research and production in Nye, Esmeralda, and Lincoln counties. Efforts will focus on the following, each with potential for improving Central Nevada’s economic future.

(1) Assist in any way we can getting the Yucca Mountain repository effort back on track as prescribed by law. Yucca Mountain is critical to our nation’s economic and environmental future and promises significant benefits both in the near term and for generations to come.

(2) Explore, pursue and promote opportunities for research about and commercial development of nuclear power.

As nations gradually shift away from the burning of fossil fuels as their primary energy source to carbon-free sources, including the renewables, solar and the wind, it will be difficult, if not impossible, to adequately replace fossil fuels without another major source of clean, safe, and carbon-free energy available 24/7.

That source is nuclear. It is becoming increasingly clear that nuclear power is destined to play a major role in the world’s energy future if fossil fuels are to be successfully replaced with carbon-free sources. Moreover, the nations of the world don’t have a great deal of time to make the transition—perhaps a few decades at most—if considerable environmental damage, social instability, and human suffering caused by the use of fossil fuels are to be avoided. Future generations are, in effect, counting on us.

These big changes in the coming energy-use picture are helping to inspire important research on the production of nuclear power, both for fission and fusion technology. The volume of such research will only continue to grow in the coming years.

Central Nevada is an ideal place where research on nuclear power, both fission and fusion, can be conducted on as large a scale as necessary. The Nevada Test Site (NNSS) and the adjoining area are ideal for conducting much of this research and need to be vigorously promoted. Nuclear energy research, of course, has played a big part in Central Nevada history.

Central Nevada is also an ideal place to construct a number of commercial nuclear power plants, likely including those of advanced design such as TerraPower, backed by Bill Gates; and General Electric and Hitachi’s PRISM, which runs on nuclear waste.

Nuclear power produced in Central Nevada can be transported throughout the West, especially to California, helping those states and their communities get off fossil fuels. For example, while renewables currently provide about 20 percent of California’s electric power, up to 50 percent of the electricity used in Southern California comes from coal-fired power plants.

About 60 percent of California’s electricity comes from natural gas. All of this is, of course, unacceptable if we are to be serious about preserving the health of our planet, not to mention of our citizens: yearly deaths in the United States due to air pollution caused by burning fossil fuels are in the thousands.

A vigorous effort needs to be launched to promote public understanding of the safety and advantages of commercial nuclear power based on science and research and not ignorance and fear-mongering, which now permeate too much of the discussion on nuclear power. Such an effort might include developing a truly educational website on the safety of nuclear power and implementing outreach programs to communities and schools.

Members of this proposed Central Nevada economic development group would consist of present and former county commissioners (Nye, Esmeralda, and Lincoln), other county officials, local businesspeople, scientists and interested citizens. They would participate in regular meetings, doing what they can for Yucca Mountain.

A major effort would focus on bringing nuclear energy research and production of earth-friendly nuclear power to Central Nevada. The group would also be involved in developing methods for increasing public understanding of the many benefits of nuclear power in our rapidly changing world.

Formation of this group can play an important, perhaps pivotal, role in bringing a new era of increased prosperity to Central Nevada and at the same time helping to keep our beautiful planet healthy.

Interestingly, when I finished writing this column, I picked up a copy of the New York Times dated Sunday, Sept. 4, 2016. The two headlines at the top of the front page read:

“U.S. and China Set Aside Rifts for Climate Accord” and “Global Warming’s Mark: Coastal Inundation. Decades of Warnings by Scientists Are No Longer Theoretical.”

Robert D. McCracken has a doctorate in cultural anthropology and is the author of numerous books in the Nye County Town History Project.