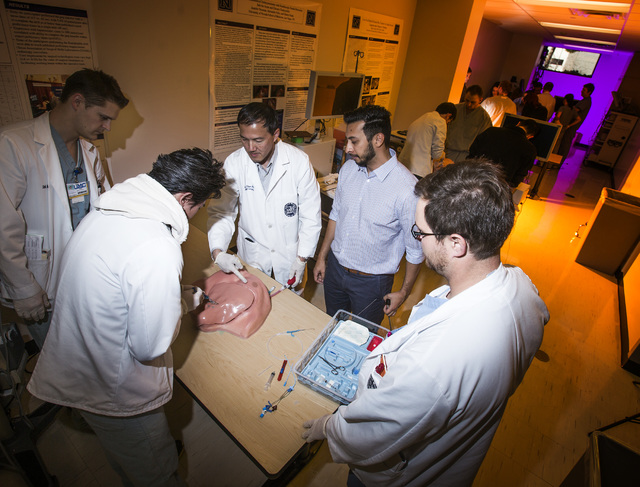 In August of this year, the former congresswoman stated on Nevada Public Radio that Nevada can’t afford two public medical schools. And with UNLV’s new school starting this year, UNR’s school should be shut down.

“We spend $60 million a biennium to keep UNR’s medical school going,” Berkley told Nevada Public Radio. She is the CEO and senior provost at Touro University/Western Division, an osteopathic medical school in Henderson. “I don’t think this state will want to sustain two medical schools.”

Berkley served as the U.S. representative for Nevada’s 1st congressional district, serving from 1999 to 2013. In 2012, she was an unsuccessful Democratic party candidate for U.S. Senate.

Her political career was derailed in part because of accusations that some of her actions in Congress were unethical.

The New York Times reported in September of 2011 that Ms. Berkley’s actions were among a series over the last five years in which she pushed legislation or twisted the arms of federal regulators to pursue an agenda that was aligned with the business interests of her husband, Dr. Larry Lehrner. In December 2012 the House Ethics Committee found that Rep. Berkley “violated House rules and other laws, rules and standards of conduct.”

Her comments about closing the Reno medical school seem to contradict the needs of our state residents for better health care and what the universities say is needed to increase the number of doctors here.

This state, like many other states, is experiencing a severe shortage of doctors and nurses.

If you book an appointment to see your regular family doctor be prepared to wait at least a month to get in if not longer. Urgent care facilities are overwhelmed because you can’t get into a general practitioner’s office because there are not enough doctors.

Our state needs every available doctor and nurse our schools can graduate. They also need to complete their residency programs here so that they stay in Nevada and don’t move out of state.

In Nevada Business Magazine, Dr. Thomas Schwenk, Dean, UNR School of Medicine stated, “We have a tremendous shortage of physicians in nearly all specialties.” The problem is compounded by the fact that, “until recently we’ve had a limited system of public medicine education leading to residency education and into practicing physicians,” he said.

Dr. Schwenk, along with the dean of UNLV’s School of Medicine, Dr. Barbara Atkinson and the deans of Touro and Roseman universities are working to repair Nevada’s dismal numbers.

In 2016, the state funded an additional $10 million for residency programs in Nevada. The money was part of $44 million in medical education expansion approved by lawmakers during the 2015 Legislature.

Of that, $27 million was dedicated to start the UNLV Medical School. Ms. Berkley’s school, Touro University, received a $1.2 million grant as part of the $10 million allocated to residency programs. That grant will fund the development of a one-year geriatric medicine fellowship program that will graduate four fellows per year. But more residencies are needed here to keep doctors in the state and our medical programs growing.

Ms. Berkley’s comments also fan the flames of the North vs. South arguments and ignores the agreement that brought the UNLV Medical School into existence. In 2013, the presidents of UNR and UNLV signed a preliminary partnership agreement that led to the creation of the medical school in Southern Nevada.

The agreement, or memorandum of understanding, outlined a vision for UNR and UNLV to work together to create a UNLV medical school that would open over the next several years and eventually become independent.

The agreement was based on a partnership model, where an existing medical school helps kickstart another school. This model has been used successfully in other states. UNR has an established track record — it’s accredited and has been established for enough time. A partnership model was deemed the best way to leverage funds and maximize its economic impact.

In 2013, UNLV’s Lincy Institute commissioned Tripp Umbach, a top national health care consulting firm, to complete an economic impact study for $50,000. Over the course of six months, Tripp Umbach ran financial models and interviewed dozens of health care professionals and educators about the need for a medical school in Las Vegas.

The consultants found that a proposed UNLV School of Medicine would have a $1.2 billion total economic impact, including the creation of 5,353 jobs and $94 million in tax revenue by 2030.

The report is published annually to provide the most current estimates of the economic impact of the School of Medicine to the state of Nevada.

According to the report, UNSOM had a total economic contribution to the Nevada economy for the 2015 fiscal year of $292.8 million. Potentially, the two university medical school programs could eventually have an economic impact of nearly $2 billion to our state’s economy.

Our medical schools at both ends of the state add badly needed doctors to Nevada and have a significant economic impact in Northern and Southern Nevada. UNR is also the medical school designated to serve Nevada’s rural areas through the Office of Rural Health.

So, by eliminating the medical school at UNR, Ms. Berkley would also be eliminating many health care benefits for Nevada’s rural counties.

Perhaps Ms. Berkley should not worry so much about shutting down UNR’s medical school and instead focus on helping the state grow its residency programs.