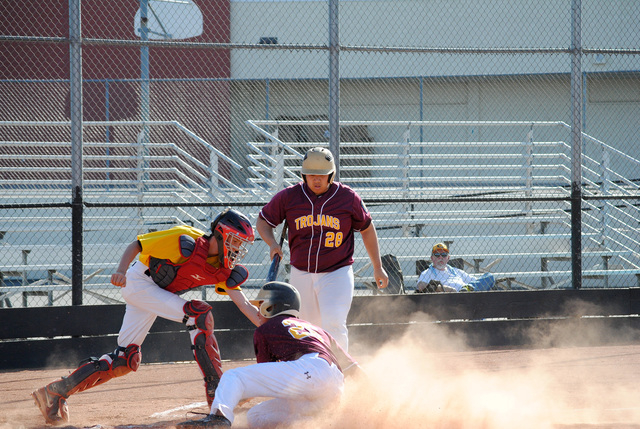 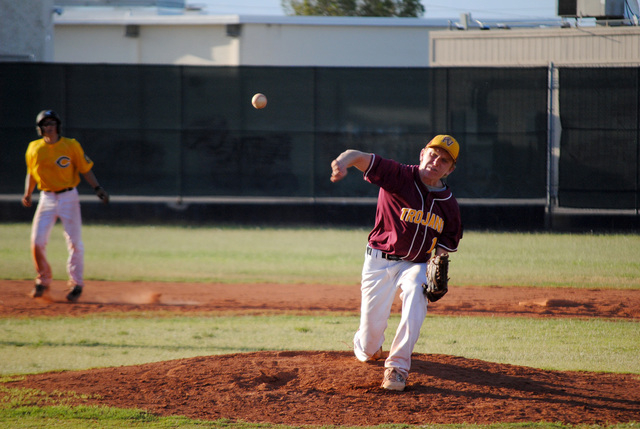 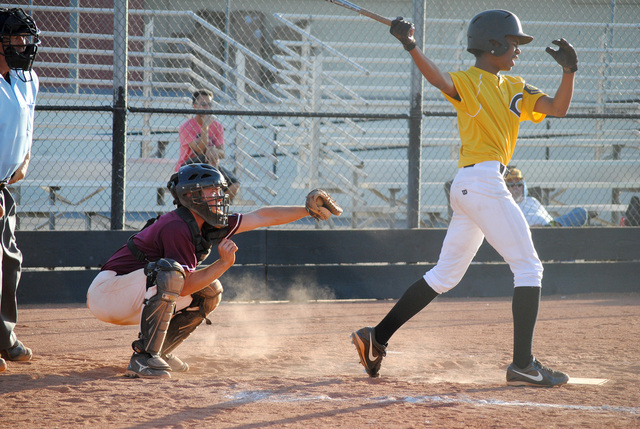 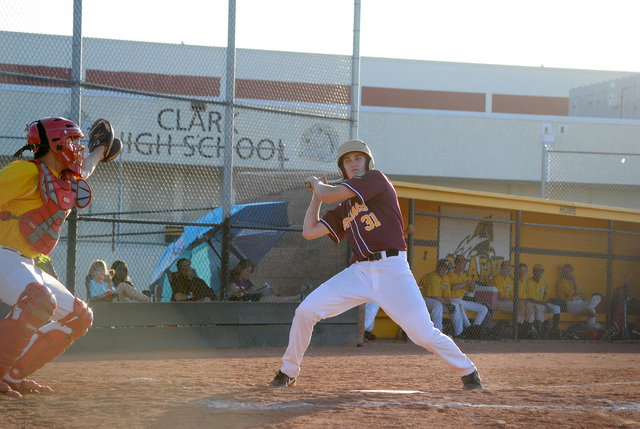 American Legion is off to a slow start this summer. This year Pahrump has two teams, a Silver League and a Coaches League. The legion team will be coached by Brian Hayes, who is also the head Trojans baseball coach. He is aided this year by returning coaches Roy Uyeno, Thom Walker and Jeff Koenig.

The team won its first game on Monday against Clark at Clark. The score was 13-6. There will be a doubleheader this Saturday against Cimarron. Josh Mortensen was the winning pitcher. Drew Walker came in for the save sometime in the 5th inning. Walker will be a sophomore and showed some promise.

According to Hayes, the team is experiencing some growing pains with the loss of eight seniors. Last year’s legion team had no problem winning games and even competed in the end of the summer tourney to see who went to the national summer tourney. This year the team is young and inexperienced.

“We lost to Sierra Vista 18-1, Bishop Gorman 1-19 and 6-23, and Coronado 4-5. Although these are JV level teams, all of the teams we have played so far would be the next best team behind Faith Lutheran if they were in our division during the high school season.

The team played a doubleheader at home on Saturday and lost 15-5 and 2-7 in the nightcap.

Hayes also pointed out that this is the first year that the Pahrump American Legion program and high school program are one. He said basically, the Silver team is our Varsity team for next year. Last summer this was not the case. Pahrump had college age kids playing on the team.

“Looking at our summer roster, the only three players that played a significant role on our varsity team were Josh Mortensen, Dylan Ault, and Eduardo Gonzalez. We have some talented, yet inexperienced kids battling it out for positions that were filled by graduating seniors last season,” he said.

This up-coming season the Trojans outfield will take the biggest hit from the departure of so many seniors. The outfield will have to replace all three outfielders, AJ Segura, Christian Balding and Cody Kovatch. Junior Anthony Vega, sophomores Logan White and Danny Foss, and freshmen Aaron Fuentes and Parker Hart will have the opportunity to earn a starting position.

The infield will have some veterans up the middle in juniors Dylan Ault (second base) and Josh Mortensen (shortstop). Hayes always says anybody though can challenge a position and no one person has a position sewn up, even a veteran.

The corners of the infield are promising. The team had a good look at sophomore Shelton Cajudoy during the regular season and found that he can play either corner. Cajudoy had 12 at bats and hit .500. When he does hit, he hits it hard. Also competing for third are Eduardo Gonzalez and Danny Foss.

The starting varsity catcher, Carlos Rivera, decided not to play this summer, so we have junior Quinten Ward and freshman Case Murphy competing to make a push for a starting position next season.

The loss of pitchers Devin Riley and Chad Uyeno will be hard to fill. On the mound, the team does have experienced hurlers Gonzalez, and Mortensen, and also hopes to get varsity level experience for juniors Ault, and Tyler, sophomores Kyle Kral, Cajudoy, and freshmen Walker and Hart.

“Our expectation is that with a full summer of playing together and getting our younger guys varsity experience, it will carry over to our high school season, where our expectations will be high after our strong 2014 season,” Hayes said. “A lot of time and commitment needs to be put in by both our players and coaches, which is what building a successful program is all about.”