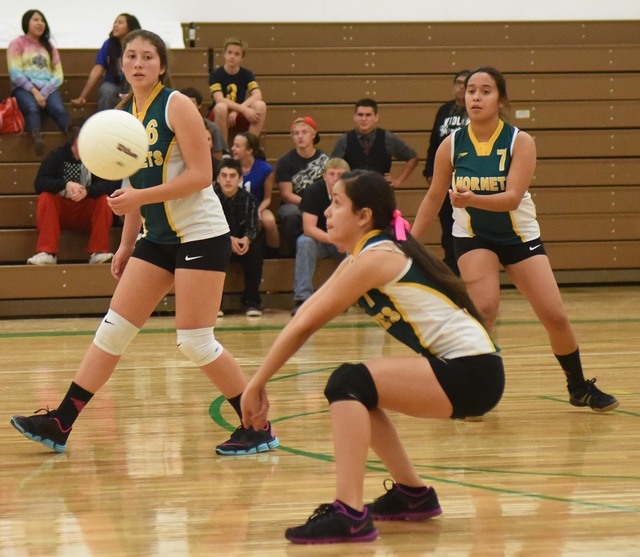 It was a battle for second place in the Southern Nevada Division IV volleyball last Friday at Sandy Valley. Beatty was hoping to pull off an upset to get the bye in the playoffs, but it wasn’t to be.

“The girls were standing around too much, not moving their feet,” Lerbakken said. “Sandy Valley has improved, but they are beatable. If we had played like we did against Tonopah or Indian Springs we would have won.”

Lerbakken said his team will now have to go to state the hard way. It may be harder, but not entirely impossible. The team played a beatable Tonopah team, who is currently in fourth place, in front of a home crowd on Tuesday (past deadline).

Tonopah Coach Chuck Fox says his girls played well against Indian Springs, but he knows they will have to step it up against the Hornets, a team they had a chance to beat two weeks ago.

“In the first two games, they weren’t making terrible errors, or playing bad, it was just little things that were getting to us,” Fox said. “In game three and four they started playing like I know they are capable of. It was so nice to see them turn up the heat and really make Indian Springs play.”

In their last game, the Muckers’ spirit came out in the third game when the coach called his second timeout.

“The score was 9-19 in favor of Indian Springs,” Fox said. “So, they turned on the afterburners and worked hard for each and every point. They played such great ball that it was fun watching them on the court.”

The winner of the Beatty-Tonopah game will play Sandy Valley on Nov. 8 at Pahranagat Valley High School. Beatty has been in every playoff since 2007. Their last state tournament was in 1998.

Tonopah has been in the playoffs every year since 2004 and their last state tournament appearance was in 2013. They won state in 2012.

The Lady Trojans played Boulder City on Tuesday at Sunrise Mountain in the first round of the Southern Nevada Division I-A playoffs. The winner of this game (which was past deadline) will play the winner of the Sierra Vista-Moapa Valley game.