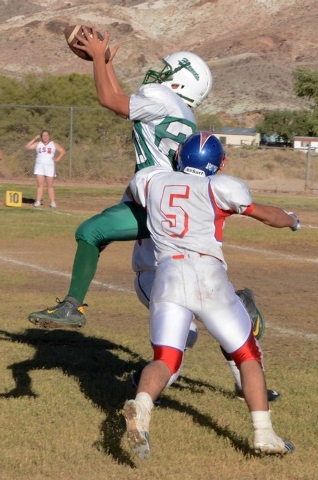 Ask anyone last year about this time if they thought Beatty would make the playoffs in football this year and they would probably laugh you out of the room, but this year they are in the playoffs.

Hornets Coach James Robertson has taken a 2-5 team last year and has made them a 5-2 team this year. So drastic is the change that the rumor has it he may take coach of the year. This is after Beatty (7-2 overall, 5-2 Southern Division IV) beat Sandy Valley (6-3, 4-3) last Thursday, soundly 40-28 to take third place this year in league.

“I had a hell of a year,” he said. “I say it has been the team who has done all the work, not me. They were expecting Spring Mountain and Alamo but not us.”

The key to the win was the Hornets’ rushing attack. Sophomore Jhonpaul Adujar carried the ball 27 times for 207 yards.

“We were really motivated for the Sandy Valley game because the fans were there. Adujar said. “We need to execute and keep doing what we have been doing. Really, I make plays because we have good blockers making the holes. I just run through them.”

The coach said it was a game that took patience because all running attacks do.

“We ran the ball down their throats,” he said. “I stole this tactic from former USC coach, John McKay, years ago, who said, ‘The football does not weigh too much, you can carry it for 45 times because the ball only weighs 2 pounds.’ He had OJ Simpson do that.”

Defensively the Beatty defense played a great game and made the other team turn over the ball two times. Sophomore Robby Revert had a 24-yard interception for six points. It was his first touchdown.

“Our defense stopped them when we had to,” Robertson said. “That interception changed the game early in the second quarter.”

The coach said the game started off just like the Tonopah game. The Sidewinders came out and tried to run the ball on the Hornets. They ran the ball right at them and went down the field and scored the first touchdown. Beatty came right back and scored.

The Hornets’ second score came off a fumble.

“We then got a fumble recovery and we scored again on a 5-yard pass to Jacob Oseguera,” the coach said.

Beatty did not have much of a passing game, but Jacob Oseguera had two touchdowns through the air. One was for five yards and another for three.

The Hornets passed for 25-yards passing and 300-yards rushing.

Robertson said for his team to stop Spring Mountain (7-2, 6-1) Beatty has to have a complete game.

“We’ve got to stop their running backs,” he said. “We couldn’t stop their backs last time. We’ve also got to put the ball in the end zone when we get into the red zone. So we need to play solid defense and put points on the board after we have decent drives.”

The Hornets play the Golden Eagles this Friday at Spring Mountain at 7 p.m. The last time the two teams met, Spring Mountain won 16-0. The last playoff appearance the Hornets made was in 1996. Beatty has three state titles, which were in 1996, 1993 and 1990.

The Hornets fans are talking state. James Revert owns Revert Tire and has a son Bobby on the team.

“We just need to win this game and we are in the state tourney. I really think the guys can beat this team. The first time they played them they were intimidated by them. They are much improved now and should do better,” Revert said.

If Beatty beats Spring Mountain then they will face Pahranagat Valley for the southern regional title on either November 14 or 15. The site will be determined.