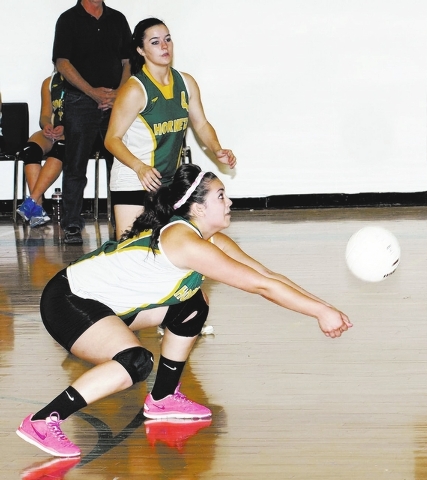 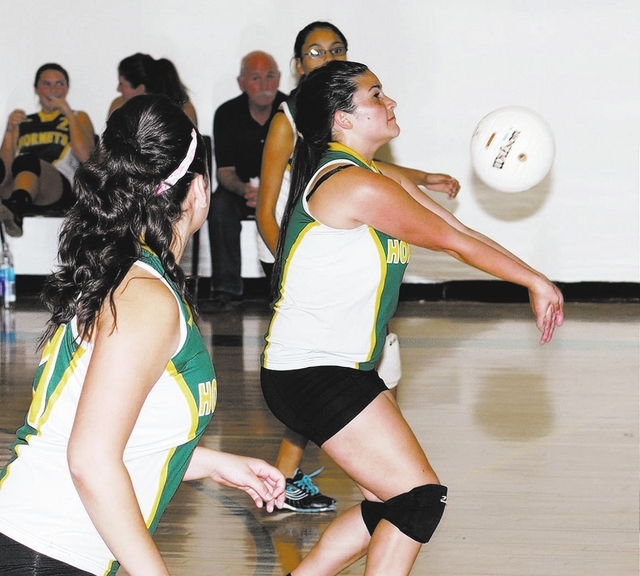 Beatty Hornets volleyball will face its toughest test since playing Pahranagat Valley earlier in the year, when they go up against the Tonopah Muckers at 3 p.m. Friday in a home game.

Beatty played Round Mountain on Friday and beat them 3-0, (25-12, 25-23, 25-20). Coming off the victory Hornets Coach Dale Lerbakken is excited to test his team against the Muckers and was pleased with the performance against Round Mountain. His team has three victories in a row beating Lund, Word of Life and Round Mountain, in that order, giving the Hornets a 3-1 record in league play.

“Our serving has been really good. We don’t get a lot of stats because we have good servers. A couple of our players like Erin Young are great servers. When Young plays she scores almost half her points on her serve. Vanessa Gamboa has been serving really well too. So they kind of make it easy for the other girls,” he said.

Lucero Hernandez and Ashley Granados joined the team against Word of Life. Lerbakken believes Hernandez will provide extra blocking ability and hitting skills when up against teams like the Muckers.

When asked if she has already made a difference he replied, “It’s really hard to tell. She makes a difference when there is tough competition. All 12 of my girls I can put on the floor and they are solid players. Lucero does more hitting and she is really good at doing that. She is showing the younger ones how to hit.”

Lerbakken expects freshman Vanessa Gamboa to also make a difference in Friday’s game. He said during the last game against Round Mountain she had nine straight points serving before the other team was able to stop her. He also expects Maggie Cathcart to give the girls a boost on defense.

“Maggie is just tremendous on the back row. Against Pahranagat Valley she had 14 digs. She has done well for us in the back,” he said.

The Muckers are coming to town after destroying Lund on Friday. They are coached by Harvey Gonzalez who took over from Judi Boni last year. Boni took the team to a state title last year. Gonzalez seems to be headed in the same direction with his hard-hitting team.

This year his team features Ashley Gray, who is averaging around 10 kills a game. She has taken over for the all-conference player Deanna Vanpoucke. Of course the Muckers come at you with multiple weapons on the court, teams also have to worry about Julia Klapper, who is also up there with about nine kills per game. In addition to the offense, the Muckers are also a strong defensive team.

The Hornets will definitely have their hands full on Friday.

“I am anxious to play them. It looks like they had a hard time with Lund and Round Mountain. They just did not … I think … roll over those teams. We will be close. They have some good weapons. We hope to knock their hits down and take their confidence away if we can,” Lerbakken said.