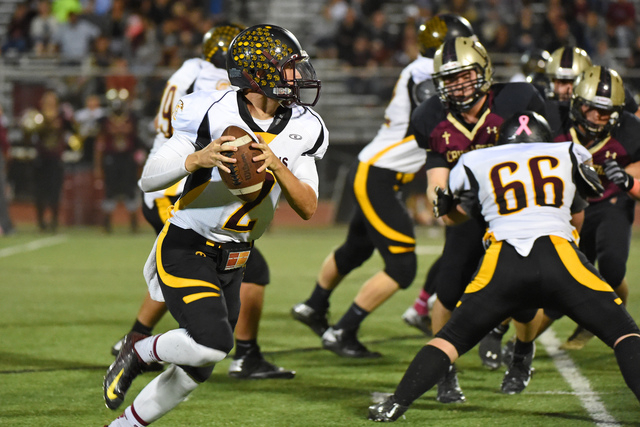 Three of the five Crusaders’ touchdowns were through the air. Faith Lutheran Quarterback Greg Benson threw for 235 yards and the team rushed for 182 yards.

The Trojans rushed for 105-yards rushing and threw for 91 yards. The Trojans scored early in the second quarter on a 53-yard pass from TJ Milk to Case Murphy. This would be their only score in the half and at halftime the score was 21-6.

Pahrump would score one more time late in the fourth quarter with five minutes left in the game. TJ milk threw a 12-yard pass to Deon Estes who took it in for the touchdown. The two point conversion made the score 38-14.

The stats tell the story. The Trojans had 196-yards total offense to the Crusaders’ 417 total yards. Trojans Coach Joe Clayton said his offense could not make things happen.

“They just kept coming, and again our offense the last three weeks has struggled, our defense has stayed on the field too long,” he said.

The Crusaders seemed to pass at will and Clayton’s defense had a hard time stopping them.

The team was up for the game. At the half, the Trojans were not out of the game, but couldn’t adjust.

“We didn’t compete in the second half,” Clayton said. “We do really well against the running teams, Cheyenne, Spring Valley, but the passing teams we struggle with. But it’s just mainly the adversity—we just didn’t handle it well, we didn’t step up.”