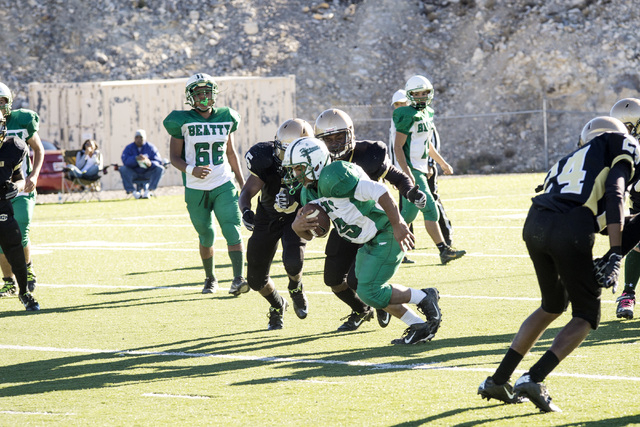 The Hornets went up against a strong defensive team last Friday at Spring Mountain and lost 74-22. Luis Flores was sacked seven times and couldn’t score in the second half.

Beatty football (7-3 overall, 5-2 Division IV Southern) played Spring Mountain ( for the chance to play in the Division IV state tournament on Friday. Hornets Coach James Robertson was disappointed but was still really proud of his team for making it that far. He and his Assistant Coach Andy Ybarra took the 1-5 in league team and completely turned the program around to a 5-2 league team.

In the game, Spring Mountain took an early lead by scoring twice. Beatty answered late in first with 4:23 left with a Jhonpaul Adujar 63-yard touchdown run, which made the score 14-6.

Spring Mountain got the ball back and scored again on a 61-yard TD run to make the score 21-6. The Hornets returned the favor with a Nick Zamora 15-yard pass from Luis Flores for six more. The two-point conversion made it 21-14.

With 10:34 in the second quarter, the Golden Eagles scored on a 19-yard pass for six and then the two-pointer was good. Beatty scored their last touchdown of the game on a Jacob Oseguera 26-yard pass from Luis Flores to make the score 30-22.

Spring Mountain would score one more with 5:10 left in the second to make the score 38-22 at the half.

The Golden Eagles would then hold the Hornets scoreless for the rest of the game. Spring Mountain then scored 14 in the third and 22 in the fourth.

In the fourth quarter the team was down by 30 points and Robertson took his first squad out of the game. After he pulled the first stringers, senior Lorenzo Pinion approached him and the coach said, “He came up to me just after I pulled the first string and he said. ‘Hey coach are you mad at us?’ and I said to him, ‘Are you crazy?’ Pinion then said to me, ‘We want you to know coach that we were 7-2 because of you. You made us believe in us as a team, we love you.’ I know now this team will always remember this year.”

Robertson said it looked like they got trounced but because he put the second team in the fourth quarter Spring Mountain scored 22 more points.

He said Spring Mountain seemed like a different school.

“The whole backfield was different, the quarterback and the backs,” he said. “I really didn’t think we would be intimidated but we were. It started when they kicked off to Flores and he fumbled it on the 1-yard line. It all started from there. Look at this way, Adujar had 12 carries for 123 yards and six other backs carried the ball and we went backwards for our rushing total. Our rushing was 80 yards for the game. Luis carried 10 times for -25. Zamora was 2 for -12.”

In the second half the Golden Eagles changed up their defense and rushed all eight players and the Hornets could not counter that tactic.

“We scored in the first half, but to counter us, they literally rushed the entire team and we couldn’t do anything,” the coach said. “We tried to run outside and pass. We couldn’t stop them and they just ran over us. They had better athletes. It was like an NFL team against a pee wee team. I tried everything, quick drops, chop blocking, quick screens and we just couldn’t stop them. Flores would take one step and be hit.”

Spring Mountain will play Virginia City in the state tourney this Saturday at 12 p.m.