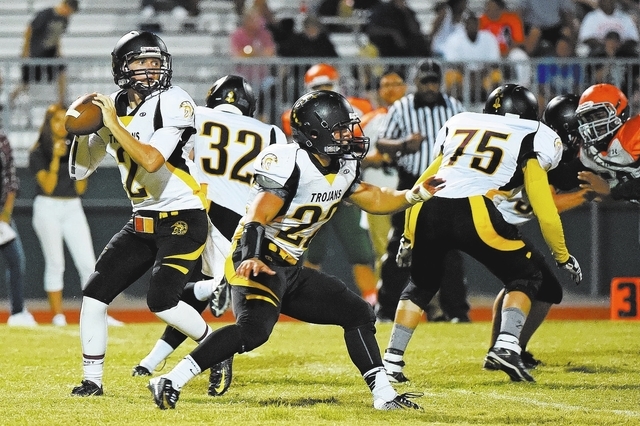 This week is homecoming for the Trojans as they face the Western Warriors at home and hope to improve to 2-2 overall and 1-1 in league play.

The Western Warriors come to Pahrump 0-3. In their last three games, they have given up 151 points and 898 yards of offense. The Warriors in turn have only produced 19 points in their three games and 557-yards total offense.

Western has two quarterbacks, senior Wyatt Rozea and junior Gregory Castenada. Castenada is the passer of the two and is 11/18 for 119 yards. Rozea is 21/59 for 370 yards. The Warriors have no running game, which should fall into the hands of the Trojans. In three games, the Warriors have rushed for 68 yards total.

The Warriors will be going up against a well balanced attack despite the two losses. TJ Milk has turned around the averages in the first three games. Normally Pahrump rushes more than passing, but for now the Trojans are averaging 80.5 yards per game and 111.3 yards in the air.

The rushing game was stopped temporarily by Mojave but should be on track against the Warriors, who have a hard time stopping a paper bag. Harris is the leading Trojans rusher with 135 yards. He is followed by England with 123 yards and Tommy Gascoigne has 76 yards.

Look for the Trojans to have a 500-yard day. Last year, a less experienced Trojans team had 485 yards against the Warriors. This year the Trojans should have 300-yards rushing and 200-yards passing and will again blank the Warriors 64-0.

Predictions for the league:

Clark at Spring Valley: Clark will continue to shine after a great win over Faith Lutheran last week, they will not slow down and will win a close game 27-21.

Mojave at Sierra Vista: Sierra Vista has not played anyone of substance and are in for a rude awakening as Mojave strikes, 45-10.