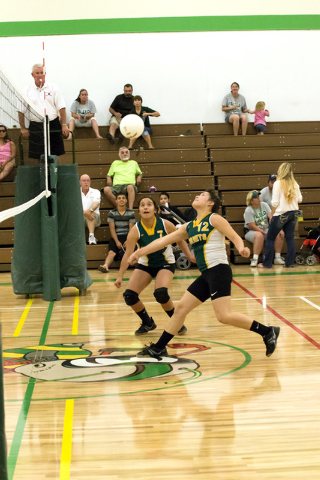 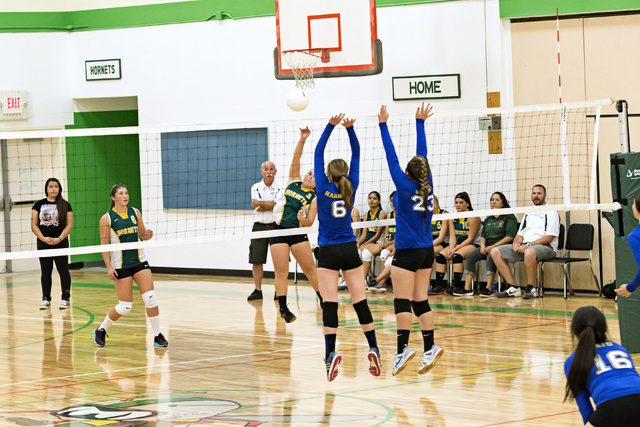 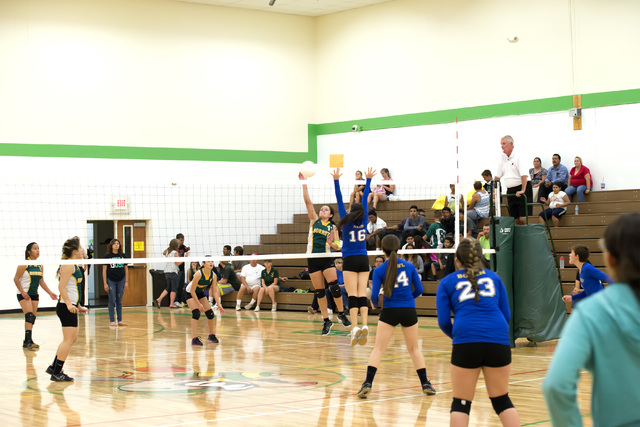 The Lady Hornets have shown in the past that they are a spunky and scrappy team. If there was a street version of high school volleyball, they would be the Division IV champions for sure.

The Hornets improved their record to 2-0 overall and 1-0 in league. Watch out Tonopah here comes the Hornets. The Muckers have shown some signs of weakness finishing only third in their Harvey Gonzalez Memorial Tournament.

Hornets Coach Dale Lerbakken said his girls will be working on their serves. “Being the first home game of the season the girls were a little overanxious, hitting the ball too hard on their hits and serves — especially serves. We gave up a ton of serves which allowed Lund into the games,” Lerbakken said.

He said his team finally got back on track in the fourth game. “We were behind 15-9 at one point. A time out, and plea from me to reach deep within to finish off the Mustangs seemed to work for a change,” he said.

Girls who stood out were Maggie Cathcart, Denise Gonzales, Claudia Granados, Anel Gamboa and Alexia Gil. “Our defense was mostly acceptable, except for failure to move their feet at key points, but we are really working on that this week,” Lerbakken said.

Tonight the Hornets play Quest Academy in league action that starts at 6 p.m.

Tonopah is swept by Sierra Lutheran. Sometimes things just don’t work out, and last Friday was one of those days. The Lady Muckers traveled to Carson City to play against Sierra Lutheran and it did not go as expected in non-conference action last Friday. The Muckers lost 3-0.

The Muckers are 2-3 overall with no league games played. The team starts its season against Division IV powerhouse, the Pahranagat Valley Panthers, on Friday at Alamo at 4 p.m.

Muckers Coach Chuck Fox is well aware that the moment of the truth has arrived. “It’s the first league game of the year, and it starts now. Everything else was just a warm-up. Now we are playing for a slot at state,” he said. The Lady Muckers coach is optimistic of his team’s chances to beat their next opponent. “Alamo has a good solid program, but it comes down to who is ready to win and who wants it more. I think the Lady Muckers want it,” he continued.

Round Mountain Knights continue to sputter. They lost to Sandy Valley last week 3-0. The Knights are 0-3 overall and 0-1 in league play.

Alba Amoros contributed to this story.