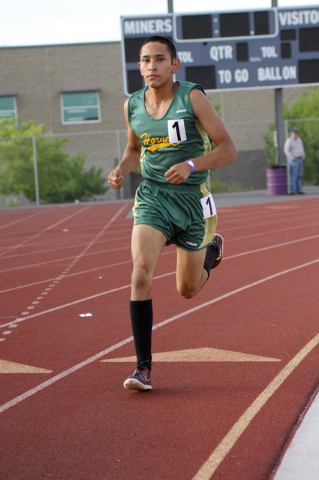 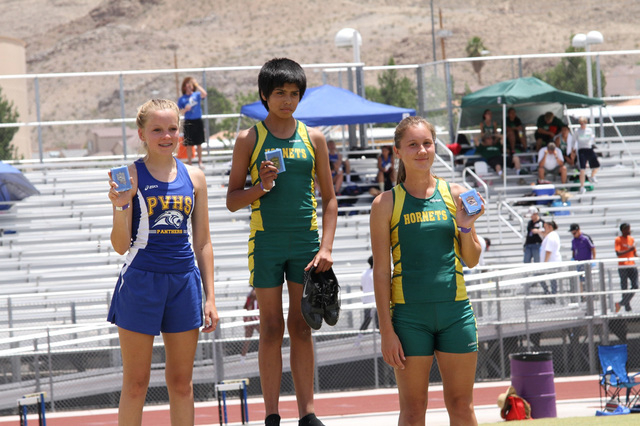 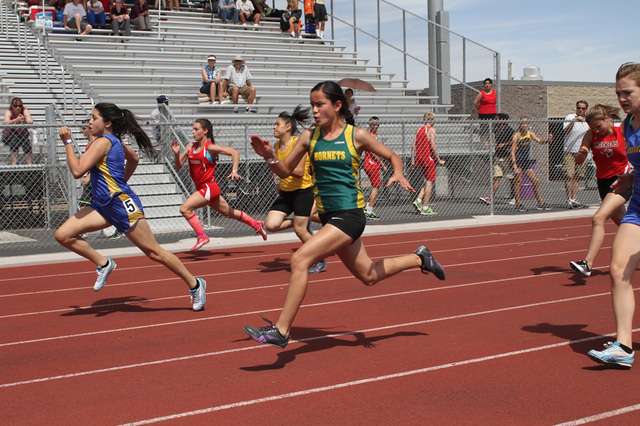 What is really cool about watching Beatty High School track is with each meet they just get better and better. Beatty seems to find new ways to win.

Beatty has 27 athletes going to state this week in Carson City. Hornets Coach Jerry Adcox has 14 boys and 13 girls going to the big show, which is today and Saturday.

Adcox was saying in the early season how proud he was of his long distance tradition. It appears there are some girls in Beatty who want to start a new tradition — sprinting.

The Lady Hornets sprinters surprised people and made some noise at the Sunrise Mountain regional meet. The hard-working Vanessa Gamboa and Alexi Gil qualified in both the 100 and the 200-meter runs. In addition, they also qualified for the 4×100-meter relay.

Both of these girls are freshman and possibly could start a sprinting tradition at Beatty High School.

The long distance girls and the field events girls did surprisingly well at the regional meet. Freshman sensation Jasmin Pelayo made a big splash at the regional meet where she qualified in the 800-meter run by taking 1st with a 2:42.9 time. She then took first in the 1,600 (6:08.55) and the 3,200 (13:25.77). As a freshman Pelayo has qualified in four events for state. Her last event will be the 4×800 relay.

The distance girls stacked the races and overpowered their competition. In the 800 for example, Granados took 3rd, then took 2nd in the 1,600 and 3rd in the 3,200. Sinai Hernandez took 4th in the 800, Zuri Pimentel took 3rd in the 1,600 and 2nd in the 3,200. This gave three places to the Hornets in three events for a boatload of points. If the Hornets could do this in the state meet today and tomorrow they can repeat as champions.

Of course without senior leadership, the team would drift and have no goals. Christina Thompson has been leading by example all year in four events, the pole vault, high jump, long jump and the triple. Thompson qualified for state in all four events but she is better known and favored to win in the triple (32-05) and the long jump (15-09). Her jumps are number one in the long jump in her division in state and number two for the triple jump in state. She would be in the top 5 in the state in Division 1-A. Thompson has a chance to come out as a double champion in the triple and the long jump if everything goes well for her.

In the 4×400, Hernandez, Nicole Zamora, Earie Davis and Alyssa Martin will go. In the 4×800, Granados, Pimentel, Pelayo and Martin qualified. Of the three teams the Lady Hornets took first in the 4×100 and 4×800 races at Sunrise Mountain.

For the boys, the story has been Enrique Orozco. Orozco as a sophomore switched over from sprinting last year to running long distance this year. His steadfast determination has made him a winner and a better runner. He is the type of competitor that is good for plus 20 points. He qualified for state in three events for state, the 800 he took first at the regional (2:12.37), first in the 1,600 (4:53.24) and a 2nd place in the pole vault (8-0).

Italian exchange student, Michele Grisafi qualified for state in the 300-meter hurdles. He will have something to talk about when he goes home.

Beatty’s 4×100 will be going to state. The team consists of Isaias Femat, Johnpaul Adajar, Diego Maldonado and Juan Cimental. The boys 4×400 team, consisting of Femat, Nahum Favela, Matt Woods and Michael Olson will be going as well as the 4×800 team. The 800 team consists of Favela, Alejandro Granados, Adajar and Grisafi.

In the field events, the Hornets will depend on Lorenzo Pinion, 36-07 throw, who took 4th in the shot put at the regional tourney and was 2nd in the discus (112-06).

Some other Hornets to watch would be Nate Russell in the pole vault who finished 1st at the regional with a 9-06. Orozco (8-00) was 2nd in the same event with Grisafi coming in 3rd (7-06).

The team will have two long jumpers, Adajar and Olson. They were 1st and 3rd at the regional tourney. Olson will be the lone triple jumper and he took 2nd at the regional.