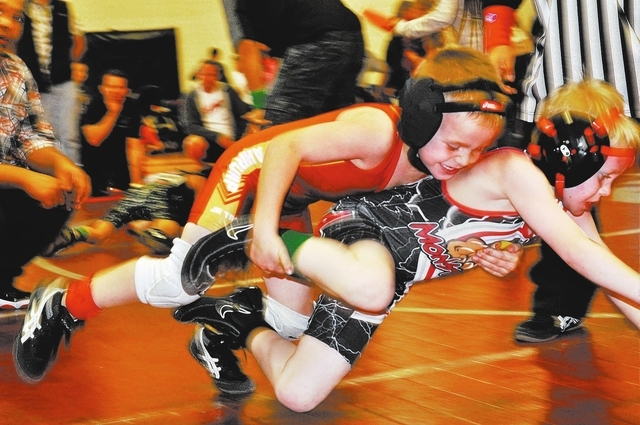 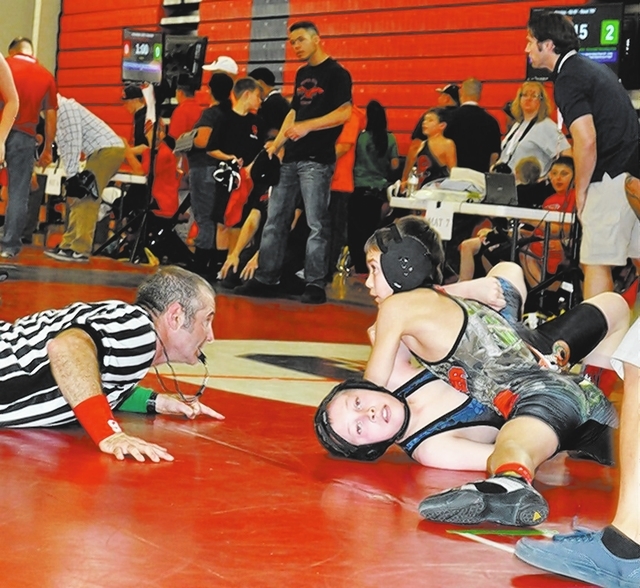 The Pahrump Valley Junior Trojans Wrestling team was at the Rattler Roundup on Dec. 14 at Mojave High School and took third place overall. The competition was stiff with close to 445 wrestlers there.

In the past, the Pahrump Valley Junior Trojans have sent 10 to 12 kids to large tournaments. Those days are gone.

Junior Trojans Coach Ray Cortez said participation for the tournaments are on the rise and this is helping the Trojans score better. He said the team had 28 kids that went to the tournament last weekend and this has steadily increased over the years.

“We usually have 15 kids. These tournaments are scored depending on the size of the bracket. The bigger the bracket, the more potential team points the kid can score. You can only score the top 20 kids from your team. In years past we were not able to get 20 kids to score the maximum. This year we have more than enough,” Cortez explained.

The coach named Caden Briscoe as the Junior Trojans wrestler of the week.

“He got the fastest pin of tournament,” he said.

Cortez said the Trojans placed third overall and the coach credits his team’s dedication and hard work for placing so high.

“One thing I noticed about the weekend is the kids were trying new and different moves. In the past we had wrestlers who were set in their ways and they did the same stuff that worked all the time. For those wrestlers, it will come to a head where those things won’t work all the time and you have to be able to switch up and go to the next move. I have seen some experienced kids and some new kids working moves that we have been practicing during the week and the previous weeks. I think this is a big factor for getting all the wins we got. The team is willing to go out and try new moves,” he said.

The Junior Trojans will be at the Holiday Classic at the Las Vegas Convention Center this weekend.