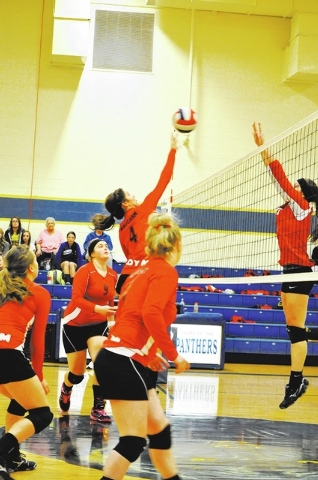 The Tonopah Muckers remain the only Nye County Division-4 school in volleyball still in the playoffs and will be going to the state title tourney as the number two seed.

The Muckers commenced their journey through the playoffs with a big win against the Indian Springs Thunderbirds in three games (25-8, 25-17 and 27-25) in the semifinals played at Pahranagat Valley High School.

The Tonopah girls did their job achieving a crucial victory against the Thunderbirds (Overall: 12-8, League: 6-2) that allowed them to move forward to the next round of the State Championship. Muckers Coach Harvey Gonzalez said his players played well.

“They did work hard and played hard,” he said. “We took care of business against Indian Springs. The girls played good, they were serving well and passing well although we had a few mistakes.”

The Muckers played the Panthers once again for the regional title, also last Saturday to decide who would go as the number one and the number two seed from the South. The Panthers again defeated the Lady Muckers by a score 25-9, 25-12 and 25-21.

Harvey Gonzalez’ girls had long been practicing to solve those issues that they experienced in the last game of the regular season against the Panthers, but it did not work out as expected.

“We knew everything Alamo was going to do. We studied our game film, but the girls just did not pass well, our speed was off and we had a lot of hitting errors. In addition, we gave the other team too many free points,” Gonzalez explained.

The Panthers from Alamo had an overall of 28-2 and 8-0 in League record this year. Once again Panthers Coach Ginger Whipple was able to mold a bunch of girls into a championship team. Pahranagat Valley will be playing on Nov. 15 against Eureka the number two seed from the North while the Lady Muckers will face the Smith Valley Bulldogs, the number one seed from the North.

Coach Gonzalez believes in his team.

“I am proud of our girls. They have what it takes. We will work hard at practice this week and we will be ready,” he said.