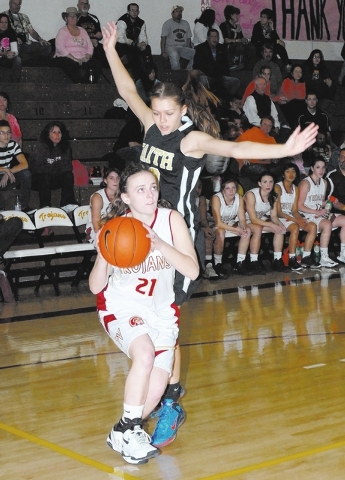 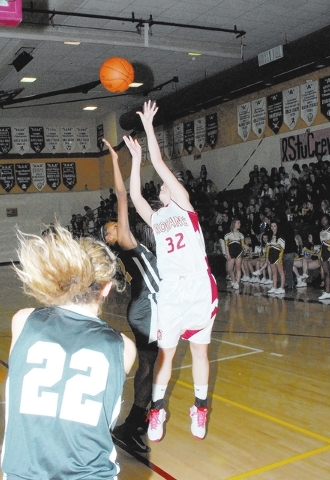 The Pahrump Valley Trojan girls basketball record has now become 6-7 after a loss to Rancho on Monday. The final score was 41-11. Head coach Jennifer Hagstrom was disappointed to say the least.

“That team wasn’t 30 points better than us, 10 maybe but definitely not 30,” Hagstrom said.

The Trojans kept it close in the first quarter of the game allowing only 6 points and scoring 4 themselves as they played a 2-3 zone defense fairly well.

“We started off playing the zone pretty well,” Hagstrom said, “But we had to go into a man defense at the beginning of the second half.”

The Trojans were outmatched in size and speed. Hagstrom knew before the game started that they were going to have their hands full, especially with two of the Rancho players.

Hagstrom said, “12 and 44 we knew were going to be tough. We were outsized by their guards and when we went into the man defense 44 just started killing us.”

Despite the four baskets and three free throws the Trojans made, they had some opportunities that the team just didn’t take or they didn’t score.

The Trojans attempted 32 shots at the basket. Hagstrom approved of the majority of the shots taken.

Hagstrom said, “We got some really good shots up, they just were not falling for us.”

Assistant coach Ed Kirkwood expressed frustration with the lack of points on the board.

Kirkwood said, “It is frustrating we can’t score more. We are going to work on hitting that 4 x 6 piece of glass behind the basket. Everyone wants to swish the ball. This week we are going to focus on the backboard a lot.”

Hagstrom said, “They were so much bigger than us and they got a lot of put backs that they scored a lot on. Boxing out killed us they killed us on the boards.”

Kirkwood commented on the skills of the post player of Rancho.

Kirkwood said, “She was a very polished post player. She was only 5”9 which might hurt her in the end but she can seal, box out, go left or go right. Since I have been here I haven’t seen a caliber post player like that. She gets extra coaching and she works hard. She is just very polished. She is going places.”

The first half of the game seemed to show positives with the Trojans having 4 steals and being 2-2 from the free throw line. Unfortunately when the Trojans went man-to-man defense they were unable to contain Rancho’s big girl.

Hagstrom said, “ We turned the ball over too much. 44 just killed us. My post players were disappointed and upset no doubt, but like I told them in the locker room, that was a really good post player and by playing against those girls we get better. It was a learning experience. We know what we have to work on.”

Last week the Lady Trojans lost to Chaparral at home 58-25 and on Friday the team beat Mountain View 30-25.

On Thursday the Trojans will be playing against Del Sol at home. Kirkwood and Hagstrom are focusing on the game plan for Thursday.

“We saw them play at the first tournament and they are very similar to us. They are scrappy but not real big. They miss a lot of shots like we do and are similar size. We will probably play man to man and keep up the tempo. We are going to make them handle the ball and try to make them make mistakes like teams do to us,” Kirkwood said.

In other regional games: The Lady Hornets will play their last game before the holiday against Mountain View at Las Vegas on Dec. 19 at 5 p.m. The Beatty men’s team plays at 6:30 p.m.