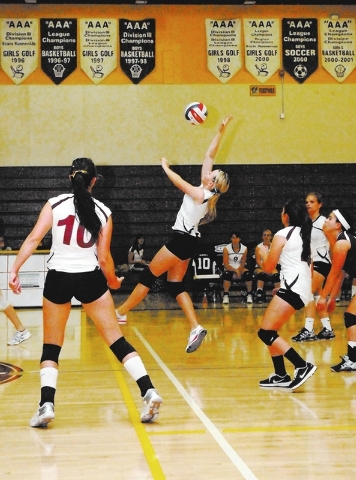 The Lady Trojans were in Las Vegas for the Las Vegas Invitational volleyball tournament over the weekend at Las Vegas High School. They may not have walked out of the gym with a first place trophy, but in the eyes of Trojans Coach Jill Harris the team was all winners.

“I truly do not care if we win or lose during this time, as long as we are playing and we do less crashing into each other.

“We got better as the tournament went on. We played well against Green Valley, first round. We should have beat Durango but didn’t. Compared to last year, we lasted longer in the tournament this year and we finished better than we did last year in this tournament,” she said.

The team even beat two 1-A rivals, Moapa and Chaparral. Last year the Trojans finished second and lost to Chaparral, the state runner-up in the state tourney, so Harris said it was nice to beat them at the tournament.

The coach said at this time last year her very young team had a problem deciding who would go for the ball and just watched the ball land on the court — everyone would just look at each other. This year is a bit different. The team is still young, but they are crashing into each other to get to the ball.

“The speed of the varsity team is a lot more than what some of the freshmen are used to,” she explained. “There is a big learning curve that these girls have got to overcome. Playing as many games as we did it was good for us. The first couple of games the pace was too fast for everybody. We have to get used to who we are playing next to. I have a really young team. I have only three seniors.”

“Our weakness this past week was communication. We did not call the ball as nearly as we should have. Up to this point we just assumed Payton was going to take it and now there are people there that can take it instead of Payton. They should be calling it, so we will be working on it during practice this week,” she said.

At the LVI Harris said she liked what she saw in the defense. She really believes the team’s hitting is coming along, but the defense really showed during the tourney.

“The players did really well,” Harris said. “Mikayla Davis did a good job in the middle for me. She did really well in blocking. My girls finally realize they are tall enough to block and blocking takes away the wind out of hitters’ sails really fast. We had some really nice blocks this weekend. I just have a taller front row this year. Defensively at the net we will be stronger this year. It think I had more full blocks earlier this year than I did last year. We are a little bit ahead of the curve compared to last year at the same time. I think we have a stronger team this year.”

Pahrump goes right from the LVI right into the Pahrump Valley Invitational, which her team plays host to 18 teams from all over Southern Nevada. The tournament will be played from 8 a.m. until 8 p.m. and will include teams from Division 4 and Division 3 as well as Division 1-A teams. Last year Division 4 Tonopah Muckers almost took the whole thing.