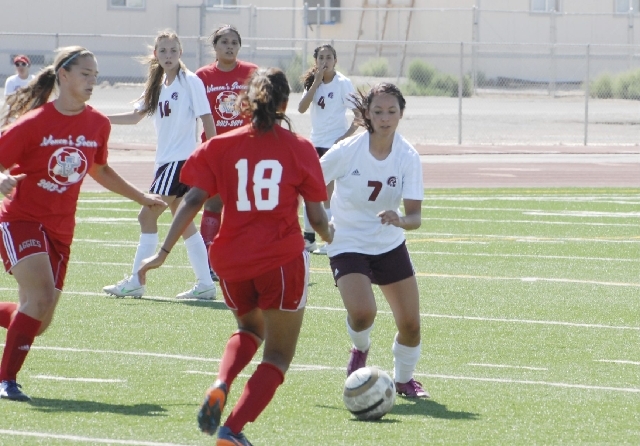 The Trojans girls soccer team ramped up its training in a scrimmage with last year’s Division I state champion Arbor View Aggies last Friday morning. The girls hung in there with the champs and came out 3-2 with Arbor View on top.

The scrimmage started at 10 a.m. and was run like a normal game but without official scorekeeping. The scores were not recorded and meant nothing but were used to gauge play.

There were minor infractions called by student referees, otherwise the game was non-stop action.

Arbor View Coach Jay Howard said his team had to dust off the cobwebs at first.

“We have chemistry issues now and that is why we wanted to play a good team. We lost four starters from last year. I thought playing Pahrump was great, their coach wanted to set up the games.

“I am glad she did because it gets our team to understand the level of play we need to be at. Hopefully it would help Pahrump too. We had three girls not here today. Hopefully we will be a little more organized when we play them again. We need to max the intensity. Pahrump was very intense and it took us 20 minutes to match it. Once we did it was pretty even,” Howard said.

Trojans Coach Pam Larmouth was very excited to get the year underway.

The team was up for the challenge, but still has some major issues to take care of before the conference schedule starts on Sept. 17 against Adelson School.

Larmouth has to replace three seniors she lost to graduation, Kaitlin Klem on defense, Haley Sladek a midfielder, and forward Sara Dennis. She said all those issues should be taken care of soon.

“We have a new defender we are working with and we have Brit out (Brittany Klenzcar),” Larmouth said. “So we have new people that have to learn our system of play and where and what to do. That is what they are doing. We are playing Arbor View again, because they are really intense. We like the way they are on the ball. These girls will pick things up a lot faster since we are playing teams like this. We got a new wing we are working with, so we got four new players we are working with.”

Assistant Coach Joe Sladek reminded the girls after the game there are still starting positions to be had and now was not the time to be slacking.

“I want the girls to have more of a thirst and more of a desire to go for a starting position and to be involved,” he said. “With some of them, I have higher expectations because they have played with us for more than a year.”

“We have one of our back line injured and so we are looking for two defenders for the next two weeks. I keep emphasizing to the girls that we have not picked starters yet. We picked varsity but not starters,” she said.

For the most part, both Trojans coaches were satisfied with the way the team performed.

The two teams will go head-to-head again, next time it will be a non-conference game on Sept 3, at 3:30 p.m. at Arbor View.