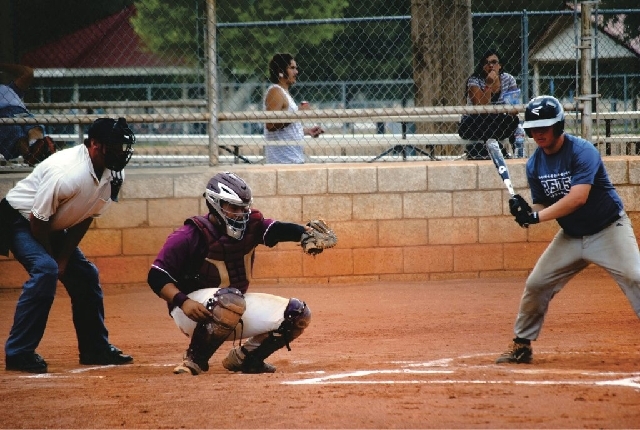 Both local American Legion teams concluded the summer season this week. The long season started in late May.

The Pahrump Coaches League team finished out its season by winning its last game. The coaches league is made up of players up to 16.

The team was scheduled to play two games on Saturday against a Mojave/Canyon Springs split squad, but because of the weather, played only one game.

Bietar said Johnny Arriola and AJ Segura pitched the first game. The Trojans won the game, 4-1. Arriola pitched a good solid three innings before turning the pitching over to Segura. Arriola gave up only one unearned run due to an error at shortstop in the first inning.

“Arriola has been up and down this summer. He is one of those kids that has natural movement in his ball as a lefty. He has a good fastball and change-up because of the movement,” the coach said. “Both games were close so there was not too much to complain about.”

The second game was called after three innings of play due to high winds and rain. The score was 4-3 when they called the game and Mojave was winning.

The Silver League team also played its last two games of the season. Prior to Wednesday’s game Bietar said, “If we win the last two games we will make the playoffs.” The silver is made up of players 16 and older.

This was a tall order since the Trojans pitching staff had been hard- pressed at the end of the season due to injuries and the long summer vacation.

The Trojans played the first-place Liberty team and lost, 6-2. Liberty was just too much for the Trojans.

This made the Bishop Gorman game on Thursday mean less, since the Trojans could not make the playoffs. The coach said the game would just be played for fun. The game finished too late to report.

The Pahrump Silver team is 17-8 and will finish in fifth place.

Bietar said Chad Uyeno deserved some praise for a good summer. Uyeno showed up for all the games and played three or four different positions without complaining.

“Uyeno played whenever I asked him to without saying a word,” he said.

Another positive was the pitching.

“Senior Arriola got a lot of innings between the coaches league and the silver,” he said. “Drew Middleton and Devin Rily got quite a bit of innings too.

“Sophomore Kyle Kral the same way. Kral was exposed to the silver and by the time he is a senior he should be able to dominate.”

As far as hitting, Bietar was really satisfied with the silver team’s hitting this summer.

“Richard Greene had a good summer and must be hitting over .500, and Uyeno always found a way to get on base,” the coach concluded.