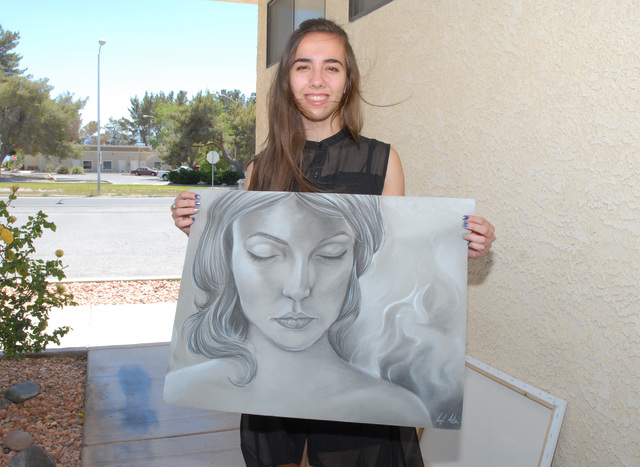 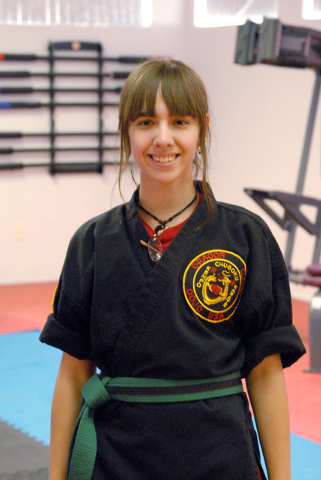 Jennifer Alba is a Pahrump Valley High School student who has literally kicked her way through high school. No, she does not play soccer.

The PVT wrote about her in June of 2012 and at that time she was just getting her brown belt in karate at Dragon Cloud Dojo. Her goal at the time was to graduate at the top of her class and get her black belt before she graduated from high school. She has done both. On April 5 of this year she received her black belt and in June she will graduate with honors.

“It was very hard. The hardest part was going through the basics. We had to stand in a horse stance for about 2 hours straight and do all our punches and kicks. By the end I could barely walk because my legs were so sore. There were eleven of us in the class and we all made it,” Alba said.

Her plan is to one day become a master, or sensei, so she can teach karate. She has no plans to use it for fighting or in mixed martial art type tournaments.

“I have a friend who does MMA fighting and I have watched a few of her tournaments and I know that gets pretty crazy. I think I will just stick to the sparring. I don’t think I will go that much in depth with it,” she said. “I am going to college so I am going to hold off on going for the sensei title. I will work though to get my 2nd degree and that means I have to work with lower ranking students and I have to learn a few more katas. While I am in college, I plan on keeping in touch with my dojo, but I also want to venture off into other styles of martial arts. I am thinking of trying kung fu.”

After graduation from high school, she will be going to University of Nevada Las Vegas where she plans on majoring in art.

“I have scholarships that will pay for at least 75 percent of my college. I plan on majoring in art. I want to study illustrator work so I can later become a concept artist for the movies. I want to be able to design the landscapes and characters and this will be my main interest. I also want to minor in Japanese to become a translator as well. I have been teaching myself Japanese for some time now,” Alba explained.

Alba said the most influential person in her life would be her mother and her sensei, Jose Hernandez, who is the owner of Dragon Cloud. She said her mother always encouraged her with her art. “Jose, I consider him as a father figure because he has helped raise my conscious level through karate,” the karate student said.

In the end, Alba feels the karate has changed her for the better. Hernandez agrees and has seen a positive change within her.

“I feel that the noticeable change is a new-found strength, a physical strength — soft but very strong, that she realizes is present within her. I am not talking about confidence. She has come to recognize her ability to take a punch or strike and give one back,” Hernandez said.

She is self-assured and believes karate has given her a new spirit.

“Now that I am leaving for college my mother has a little bit more confidence in me since I do have a black belt. I have taken punches to the face and at first it did bother me and now I just say, ‘I should have blocked that one.’ I remember in my very first sparring match I was a yellow belt and I went up against a brown belt. She punched me in the face three times, but I was not going to let that keep me back. I have seen this happen to others who have dropped out of karate forever,” Alba reminisced.

(Summer is upon us, but the PVT still wants your sports story. If your family has one, please send us an email. No age is too young or too old.)