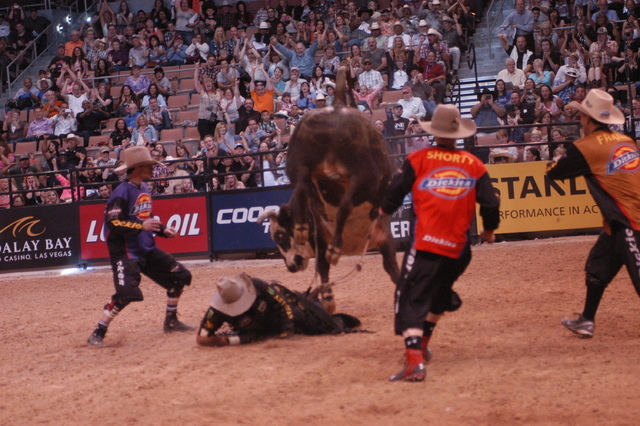 If you’re a rodeo or bull riding fan, you already know that the PBR (Professional Bull Riders) World Finals are back at the Thomas and Mack Stadium for their 21st annual event from Oct. 22nd-26th at 6 p.m.

This one proves to be even more exciting than previous years due to the closeness of the major contenders in point standings.

Any one of them could be headed back home with the one million dollar first prize and a belt buckle large enough to sink a small boat.

The legendary two-time world champion bull, Bushwacker, will be in his final outing. He has faced off riders on dozens of occasions and has only been ridden the full 8 seconds once; it was last year by world champion J.B. Mauney. This year J.B. only lasted 1.13 seconds. No rider has lasted more than 5 seconds.

Many fans would like to see Bushwacker win his third world title, but Astroid and Mick E Mouse (really) are serious contenders, both having never been ridden.

The championship bullfighters, the real heroes of the event, will be Frank Newsom, Shorty Gorham, Jesse Byrne and newcomer Cody Webster, a Newsom protégé. His dream was to fight at both the NFR (National Finals Rodeo) and the PBR by the time he was 20; he is now 22.

They will be risking their lives to put themselves between the bull and a downed rider on every ride, which is three hours of constant focus at each event.

Tickets start at just $25; a full schedule of events can be found at www.pbr.com.