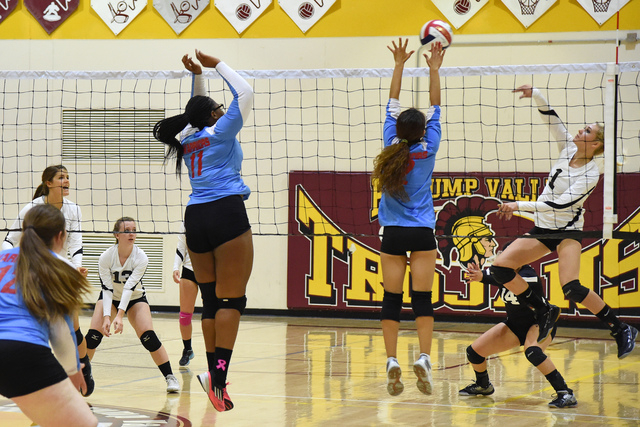 The Trojans are hanging onto fourth place and the last playoff spot by a thread with their last home win last Thursday against Western 25-14, 25-18 and 25-6. For Pahrump, the last three games will be key matches. Although the Trojans (12-15 overall, 5-5 Sunset League) dominated this opponent, Western (1-13, 0-10) is at the bottom.

“We’re at the bottom of conference—we’re sitting fourth in conference of eight or nine,” she said. “We’re coming off a three-game loss and it’s [this win] good for us. We have four games to go until playoffs and the top four go to the playoffs.”

Pahrump had no problems dispatching the Warriors quickly in three games. The game against Western was upbeat with the Lady Trojans communicating with one another well during the game. Harris said her team tends to communicate well under pressure.

Pahrump won the battle in the middle and at the net and the coach said they did this with senior Shayla Dance, who had a good game.

“One of my other blockers was sick so I had to put Shayla (Dance) in the middle tonight,” the coach said. “Taylor Kingsley served well … she served really well.”

The girls didn’t look past Western and all of them played well. According to the coach, sophomore Alexis Trieb also played well in the outside position.

“She is really a good outsider. Alexis played a really good game tonight. She’s not felt well the last few days and she’s been a little off, but she’s coming out of that,” Harris said.

The last time the Lady Trojans played Clark, they beat them in three straight games. Harris is hoping to repeat that tonight.