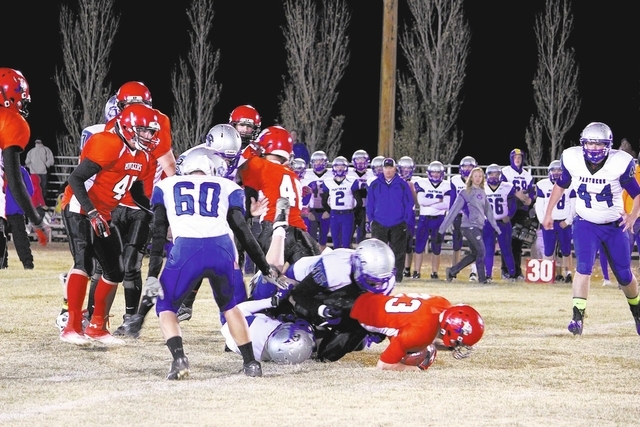 The Tonopah Muckers football team played the Pahranagat Valley Panthers and could not end their winning streak of 65 games and became the 66th. The Panthers not only have an unbelievable winning streak, but they also have 5 consecutive state titles in a row.

The local team fought like gladiators until the last breath against the toughest adversary of the season. The Panthers are ranked 44th nationally and number one in the state.

“They played their butts off. I am very proud of our team. We have been through a lot of adversity and the kids just keep coming back,” he said.

The game started with two early PV touchdowns that went up on the scoreboard in the first four minutes. However, Muckers responded with a Connor Friel TD (6-16).

Wade Leavitt for the Panthers scored the first two TDs and Jordan Cryts scored in the last minute of the first quarter that made the score 6-30.

Despite the good job of Jason Carman and Connor Friel, which stopped Wade Leavitt’s attack several times, the Muckers could not avoid the fifth Alamo touchdown of the game (6-36).

Jason Carman shortened the gap between the two teams scoring the last local touchdown of the night (12-38) and Matt Misener prevented the last Panthers try of the quarter (12-44).

After the halftime, the visiting team dominated the game. They scored 28 points in the last two quarters. The game ended up with a 12-72 score.

After a clear defeat, it was time for the team to work on the issues that did not turn out as expected, but also stay positive and be aware of the good job the players did.

“Our pass game really worked well this week for us, and Connor passed the ball into their zones very well. Our receivers found the holes in their zone defense and caught the ball well. I think we found a new home for Jimmy Withers as in the past two weeks he has done a very good job for the team at TE,” Otteson explained.

Muckers Head Coach analyzed the problems that his team had facing the Panthers.

“It was hard for us to score because Alamo is just a good team, when it comes to the red zone. In the middle of the field the passing zones are bigger and when you get to the end zone everything shrinks, so it was harder to pass the ball. If our running game had been a little better, I think we could have scored more. We just need to work on things and try to regroup,” the Muckers coach said thinking on the next game.

He recognized that not all went as they had planned.

“We were expecting to pass the ball on Alamo, which we did well, but we had a hard time running the ball against them. I expected to be able to run on them as our run game is very good,” he explained.

Running the ball was not an easy job considering the opponent they dealt with. This is the team that holds nation’s longest winning streak.

The Panthers are a very good team that knew how to play the Muckers well.

“Alamo was able to put our kids out of position with formations and making the big plays. They are a very well-coached team and they know what is expected of them and their kids did their jobs,” he admitted.

The Panthers did it during the whole year, having a perfect season with an overall of 9-0 and 6-0 in conference.

The Muckers were 5-4 overall and 4-2 in the conference.

“It is playoff time. This is when it counts and we have to get prepared for the next game,” Otteson told the kids after the game.

The Muckers shrug off the loss to PV and get ready for a whole new season. Indeed, next Friday the Muckers will travel to Pahranagat Valley to face the Panthers at home.