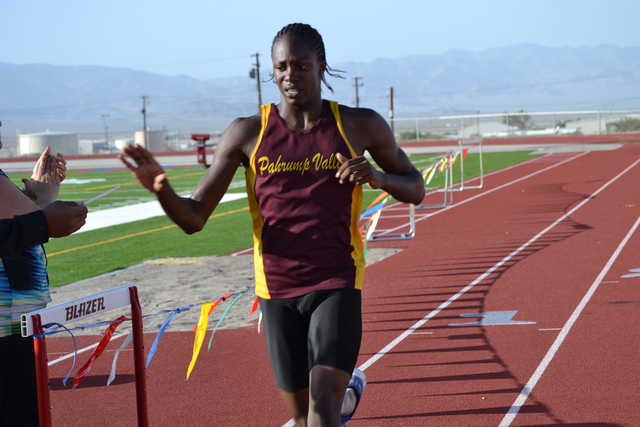 The Trojans Cross Country team has been improving with every meet. For the first time since entering the Division I-A the mens team has five to six runners who regularly finish under 21 minutes.

Trojans Coach Matt Kolozieczyk is more than happy with the latest results. “I am happy, but we still need to bring the times down, especially with the third, fourth and fifth runners. They all have been working hard and we are getting there. We improve with every race. I have been looking at all the times. Clark and Faith will give us a good run, but from the Sunrise League we have to worry about SECTA for they have a good team. We would like to be in the top three and head to state,” the coach explained.

The Falcon Invitational was held in Henderson and put on by Foothill High School on September 27. It was a middle school and high school event where 38 teams participated. The Pahrump Valley mens team finished in 10th place out of 18 with 283 points. Basic finished in first place with 41 points, an Australian team finished in second with 62 points and Coronado finished in third place with 134 points. Faith Lutheran was the top Division I-A school and finished in 7th place with 232 points.

At this meet, the Trojans had five runners under 21 minutes and another three under 22 minutes. Freshman Bryce Odegard was first for the Trojans. He continues to run well, finishing 6th out of 218 runners with a time of 17:30.0 minutes. The next fastest runner for Pahrump was freshman Layron Sonerholm, who finished 31st with a time of 18:34.1.

Sophomore Dylan Montgomery continues to run well and placed 96th with a run of 20:34.5. This is the second time he ran under 21 minutes. The first time was at the UNLV Invitational the week before, which he posted his fastest time of 20:26.5. Look for him to get into the 19-minute range.

At this point in the season, the coach makes his athletes run longer distances in the workouts in hopes of increasing endurance and bringing down times. “I try to pack on more mileage. I figure that if they can handle six to eight miles that three miles will be easy for them and that way we can increase the speed there. We are also working on the kick at the end of the race. The goal is to get that second and third mile time down. So we do speed work and distance and vary those two. I change the speeds throughout the race and find places where they can surge. If we can get one more runner under 19 we will be sitting well,” Kolozieczyk said.

At the UNLV Invitational two weeks ago the Trojans had six runners finish under 21 minutes. Odegard recorded his best time this year with an eighth place showing out of 109 runners and a time of 17:03.6. Odegard is currently ranked ninth in the state in Division I-A.

The Pahrump women continue to improve. At the Falcon the Lady Trojans had two sophomores running with the frosh/soph runners. Alicia Quiroz finished 63rd with a time of 24:26.4 and Ashley Floyd posted a 27:30.5 time.