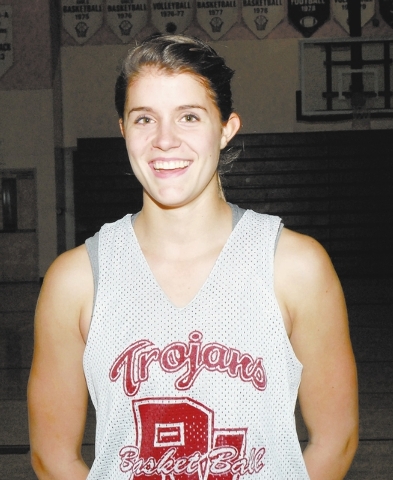 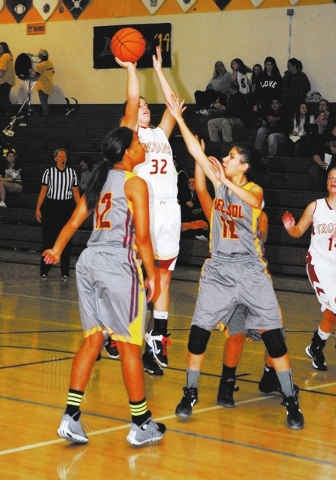 Shayla Dance has quietly grown into a huge asset to the Lady Trojans volleyball and basketball programs. She is a varsity player in both programs who has slowly been developing into a premiere athlete at the high school level.

At first, she was a timid player, but over the years she has slowly developed from a shy freshman into an aggressive player in both sports.

In volleyball, Trojans volleyball Coach Jill Harris has said she has developed into a huge blocker and strong hitter and in basketball Trojans Coach Jennifer Hagstrom said she is vital to the offense and defense.

Dance started both sports in junior high school. She is listed at 5 foot 10 inches but says in actuality she is taller on paper by an inch. When she first came to the high school she was sought after because she was the tallest female to come up from the middle school ranks. She immediately was well received by both Harris and Hagstrom. Dance made varsity for both teams in her freshman year.

For Dance, her favorite sport is basketball.

She said basketball was something she wanted to try in sixth grade.

“I remember my friend Amber Skilling and I played basketball together. I remember losing the championship to her team. The game has been really fun with friends. My group of friends we all play the same sports. They have influenced me a lot to play,” she said.

“In fifth grade I was short. In seventh grade I ate my vegetables and then I grew,” she said jokingly.

Since her freshman year Dance has worked hard to improve in all aspects of her game said her coach.

Hagstrom said she has enjoyed watching one of her premier players develop over the years.

“Shayla has grown from a very shy and somewhat timid athlete as a freshman to a much more confident and physical Junior basketball player,” Hagstrom said. “Her work in the weight room and overall conditioning is phenomenal, and I haven’t coached many student-athletes who want to work hard to be better more than she does. Her game has developed, and she is one of the top rebounders that I have seen thus far this year. Shayla has worked really hard to develop post moves, and improve her overall shot, and it’s paying dividends for her. She has had two double-doubles this season, and I am very impressed with her improvement from last season.”

In addition to being a great athlete, off the court she is a great student. She currently has a 4.0 GPA. One of her favorite classes is math and her math teacher Jim Paxton had this to say about her,

“Shayla Dance is a delightful young woman and an excellent student. She is a strong math student who works well both on her own and with others. She is a hard worker and possesses an intellect which will allow her to pursue any field of study. She is also one of the nicest people you will ever meet.”

Over the years Dance has had the opportunity to play with a lot of players, but there is one that has influenced her a lot on the court and that was former Trojans athlete Brittany Noel, a varsity basketball player who graduated in 2013. Noel helped Dance to play tough in the middle last year on the basketball court.

“I was really close friends with Brittany Noel last year and she taught me to be a physical player. She would beat me up during the practices especially when I was a freshman,” Dance said.

In the off season, Dance earns money by being a lifeguard at the local pool.

“I like to swim and over the summer I was a lifeguard. I have been swimming, for some time. If there was a swim team I would be on it,” she said.

The past summer was pretty exciting for her. Dance said she actually saved a young man’s life while on duty at the pool during the middle of the summer.

“I saved a 14-year-old boy. It was really scary. The guy told us he could not swim very well. He went into water too deep. Most of the saves involve people who have gone into water too deep. He got into the deep end and scraped his foot on the bottom so badly that the flesh was completely gone from his toes. We had to close the pool because there was just too much blood in the water. This person was alone and was not a local.”

When Dance is not saving lives, she devotes her time to her church. She is a devout Mormon and hopes to one day do her Mormon mission duties when she turns 19. Her sister is currently doing her mission in Argentina for 18 months.