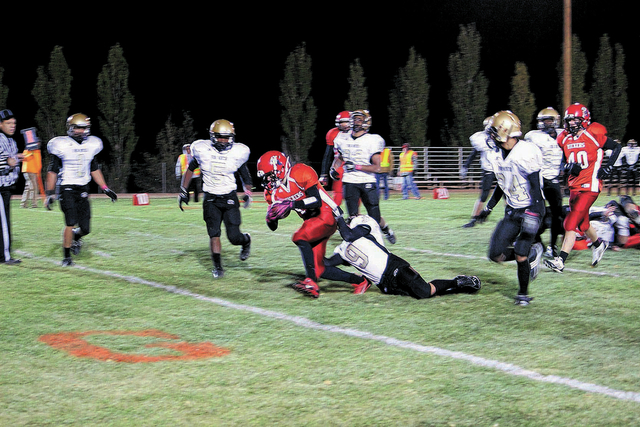 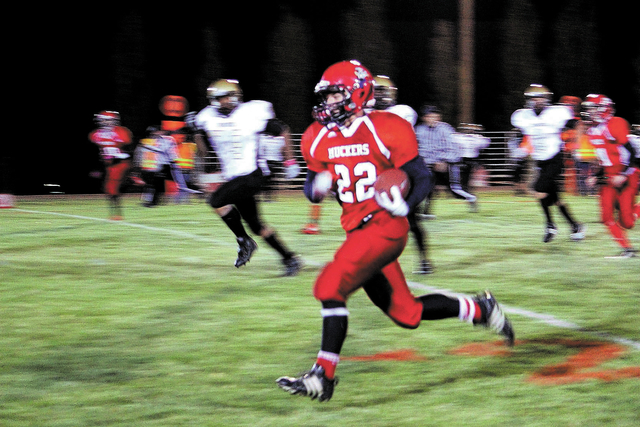 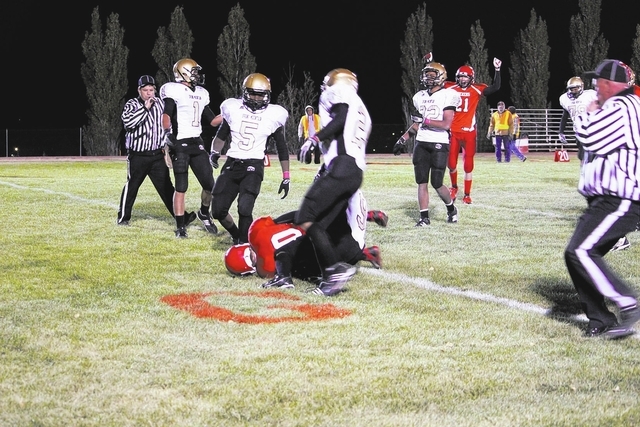 Duffy Otteson’s players never thought defeat was an option, even when they were way behind in the score.

Most of the game was won after Otteson’s team made adjustments after halftime. Otteson believed the win came from teamwork from all of his players. This was the first time the Muckers have beaten Spring Mountain since 2009.

“I’m very proud of these young men. They fought when their backs were against the wall and never gave up. Spring Mountain, in my eyes, was the best team we have played all year,” he said.

The Eagles drew first blood and were in command almost the entire game.

“They (Spring Mountain) were very athletic and big. In the first half, we were a step behind and when you can’t practice against their athleticism it is hard to be ready for them,” explained Otteson.

At the beginning of the second quarter, the score was 0-18, but the Muckers replied with two touchdowns scored by Connor Friel and Matt Misener before the half, which gave the Muckers the hope needed for the comeback.

Otteson said he made only a few adjustments at the half.

“I just told them we had to get to our jobs faster and hold our blocks. I told them at halftime that they were faster than us and bigger than us, but they still had to do their jobs to win. We stuck to the game plan and the kids did the rest. What can I say, our kids wanted it more,” explained Otteson.

The Muckers responded with three touchdowns of their own. All three came from Matt Misener and two of them were in less than two minutes. At the end of this exchange the game was 40-38, Eagles.

Misener did a great job despite the difficulties he had in the first half when his line didn’t maintain their blocks and he couldn’t go anywhere.

“Matt is a great athlete and big leader on this team, but a lot has to be said about our offensive line for doing a great job on picking up their blocks and not letting the linebackers run free. Defensively, he was a huge contributor. I think his defensive play made the bigger difference,” Otteson said.

The Tonopah team turned the game around with just three minutes to go with a decisive Friel TD (46-40). “Connor Friel found a new home this week throwing the ball to Jason Carman. They both did great jobs for us on offense, which opened up our offense to do great things,” Otteson said proudly.

The game was still not finished. It was the longest three minutes of the game for Muckers fans. Spring Mountain had the ball and they were still rushing hard.

With just two minutes remaining and the score 46-40, Jason Carman intercepted a crucial ball, returning the possession to the Muckers. It was a great end to a tough victory.

The Muckers (4-2, 3-0 in league) will travel to Beatty next Friday to take on the Hornets after their 34-28 league win over Round Mountain.

“Every game from here out is a big game for us. This team is a group of fighters and I think we have shown that,” Otteson said.

In addition to the win, the Muckers also received good news that quarterback Jimmy Withers will return in time for the face-off with Beatty.