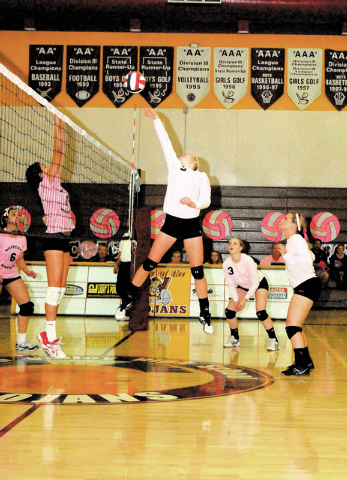 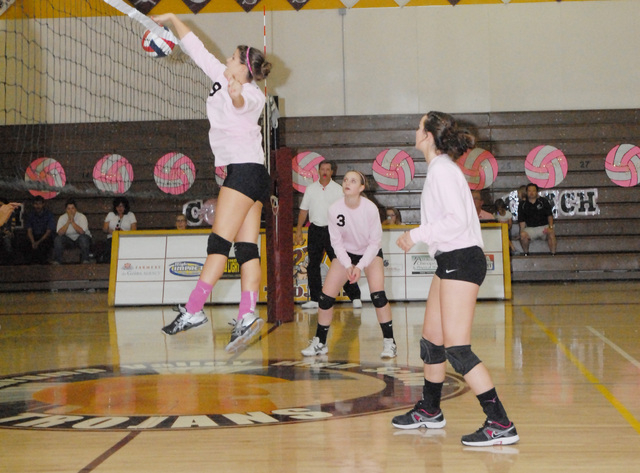 The final games of the season are ticking away and the Lady Trojans volleyball team finds themselves sitting pretty much right where they were about this time last year. The Trojans have won their last three games improving to an impressive 7-2 in league play.

Last week Trojans coach Jill Harris was worried about getting past Clark. Clark had beaten her squad twice in the year, once at a tournament 2-1 and the other time in league at home 3-1. Harris felt with her team it may have been a mental thing. Going into the game against Clark last Tuesday, Trojans Coach Jill Harris was a bit nervous.

“We have to beat Clark on Tuesday. We have to start attacking and just not play defense. Not that we don’t play good defense, we do,” she said.

That all disappeared last week as the Trojans stomped Clark.

The Lady Trojans won big on Tuesday and they know it. The Trojans knew they had to win against Clark and they beat them 3-1 at Clark. Harris knows the game of volleyball is just as much a mental game as it is skill. With the playoffs looming she wants her team on top of its game. It’s also all about momentum going into the playoffs,

The Trojans had built up a lot of steam going into the games against Western and Cheyenne. Harris’ squad killed Western at home last Thursday 3-1 and then went to Cheyenne on Monday to face a team that beat Clark twice. Cheyenne was a bit tougher than the last time they played Pahrump.

The first time Troy beat Cheyenne 3-1 at home, but at that time the Cheyenne Coach Conan Luce had said he really didn’t know which team would show up at any given game. This time around his team fought hard for the win and his good team showed up. The game went five matches with the Trojans winning the rubber match 20-18. The other scores were 25-19, 23-25, 25-19, 12-25, 20-18.

These last two victories give the Trojans some breathing room with Faith Lutheran who is undefeated in league play. Clark was the closest team to them at 4-5 so the Trojans should maintain second place regardless what happens to them against Faith on Thursday. The game is for bragging rights only as Faith is undefeated in league play and owns first place.

At this point in the season, Harris believes it is whoever shows up to play. Meaning any team can have a good game and come out and beat the other team. She said in the past her team rises to play good teams.

“We need to start playing better. We need to play well against Faith. Against Boulder City we played fairly decent. We played so poorly against Mojave despite winning,” Harris said.

Harris’ team has been playing better taking a flat Western team in four sets. The Trojans hitting and defense looked great. The Trojans no longer just rely on Payton Hart for their hitting. They are now spreading the hits around the team and opponents really do not know what the direction the hit will come from. In the last game against Cheyenne, Hart had 52 hits with 7 kills, Mikayla Davis had 19 hits and 2 kills, Shayla Dance had 31 hits and 6 kills, Jill Smith had 16 hits and 6 kills and Lauren Koenig had 23 hits and 3 kills.

Trojans hitter Payton Hart was excited about the win against Western.

“We were all really excited because it was senior night. We knew we had to win to stay in second place. We were excited and we were ready for them. Our hitting was good,” Hart said.

She said the hitting has really come around and, “You really don’t know where the hits are coming from because everyone can hit.”