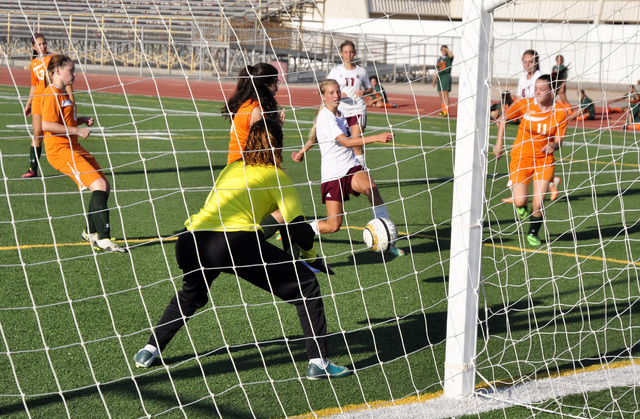 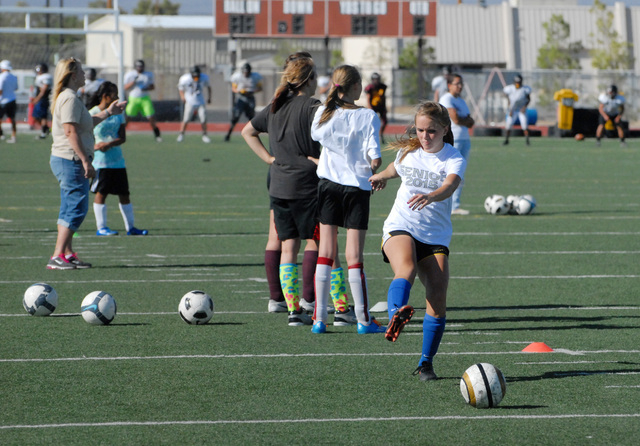 The Trojans girls soccer team are coming off a great season. Last year was almost perfect, if not for the one loss in the state final to South Tahoe. However, they did beat their rival, the Faith Lutheran Crusaders, three times and anytime you do that it’s a good season for the Trojans.

The team lost a lot of quality players last year, but they hope to make the loss up with new young talent. Trojans Coach Pam Larmouth said her team is on the young side and has only four returning starters this year. She said the team has 14 junior varsity players and 14 varsity team members. The team had 33 girls try out for the team.

The coach said Sydney Dennis, a freshman player, looks promising. “Sydney is the only freshman on the varsity team. We are looking at one other freshman on the junior varsity team and will be picking her up for our scrimmage, the game against Douglas and our tournament in Elko on Sept. 5. Sydney is an up and coming player. Her technical skills are good. She reminds us a bit of Courtney Lindsey; very even-tempered and one of those players that are making all kinds of exciting things happen without a lot of drama on the field. She will be a great asset to the team and will start at the attacking mid-field position,” she explained.

The team will play 18 games this year, starting with a scrimmage with Clark on Aug. 28 away. The girls play Douglas at home on Aug. 30 at 8 a.m.

The team has two injured players, Melina Cruz-Santos and Gabby Vasquez. Santos could be back as early as mid-September. Vasquez is a big loss and she will be out with a torn ACL for the season. Vasquez is a quick mid-fielder who runs circles around other teams’ defenders. She is a two-year veteran and her scoring abilities will be missed.

Larmouth said she has not decided on a couple of positions as far as starters. “After the scrimmage, Douglas game and tournament we should have a pretty good idea,” she said.

This season the Trojans are shopping for a new goalkeeper since Kiaya Nauck graduated. A senior, Terryn Thomas, with no experience, but great hands tried out and made the team. “Terryn is vying for starting goalkeeper,” Larmouth told the PVT. “She has not played soccer before but has played softball. She is an excellent athlete with a lot of heart and has quick reflexes. She has been working with some of our goalie coaches to learn the game. She made the varsity team and we are hoping that as she learns the game and her position, that she will become the goalie that we will need at state.”

Larmouth also said she will be using Jessica Friesz as goalie as well. “Friesz is a mid-fielder who has had some experience at goal. We are very hopeful and see a lot of potential in the new starters,” the coach explained.

At this point in the season, the coach said she is concentrating on conditioning and she said , “We are also concentrating on being first to the ball. We are planning on heading to state again this year.”