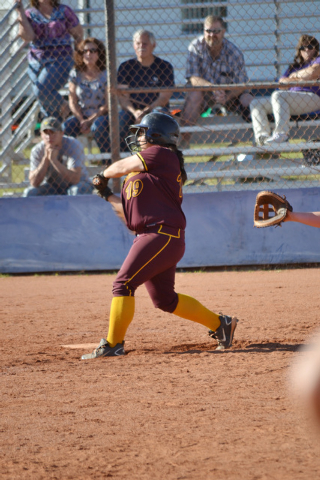 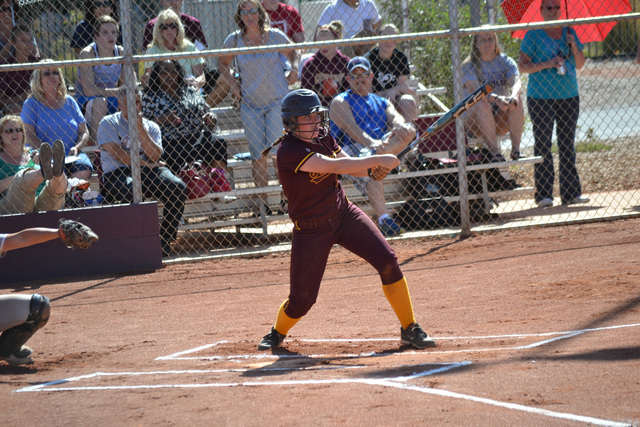 The Lady Trojans took care of business on Tuesday afternoon at Moapa, downing the Pirates 12-6.

Trojans Coach Ely Armendariz said he thought his team was going to cruise on by Moapa after the first two innings of retiring Pirate batters in order, but in the 4th inning the Pirates tied the game up 3-3 and the game was on.

Freshman Jordan Egan continues to have a hot bat and she got some help from another freshman.

“It took two freshmen to break the game wide open. We had to get some people on base and once we did Jordan Egan and Leanne Kaiwi went to work. They are batting 4th and 5th. Egan hit a single which drove in a run and Kaiwi hit a home run over the center field fence,” Armendariz said.

The Trojans scored four runs in the 7th inning which put the game on ice for them thanks to the Kaiwi home run.

Armendariz had some mid-season injuries to first baseman Jill Smith and then Maddison Hurley. The two injuries forced Armendariz to bring up some junior varsity players.

“I put Leanne at third base and moved veteran Soliwoda to left field and I think that makes us stronger defensively. Soliwoda can throw anybody out from left field,” he said.

Last Friday prior to the playoffs the team traveled to Bishop Gorman for some non-league Division I fun. Gorman is in the same league as Centennial and is 8-2. Both of Gorman’s losses came from Centennial, a team ranked number one in the region.

“My goal was just to expose my girls to a different level of play. Even in that game both my freshmen kids were getting hits and getting on base. It was definitely another level of play that my girls could achieve. We also played them last year,” the coach said.

The Trojans went to Faith Lutheran on Wednesday and did play at a different level. Prior to the game, Armendariz said his girls could win the game.

“To win we have to focus and minimize the errors. We also need to put pressure on their defense,” he said.

The Trojans did just that and beat the Crusaders with solid defense and the long ball 6-5. Rookie player Leanne Kaiwi hit another home run, a three banger in the first. The girls added a double by Lauren Koening in the 3rd to make it 6-1 and after that they just held on for the ride. Whitney Roderick blanked the Crusaders for 4 innings.

Armendariz said his defense is doing a great job and Roderick is pitching really well. He said if he can take those elements into the Boulder City game, which was played on Thursday at 5 p.m. (too late to report) his team will do well.