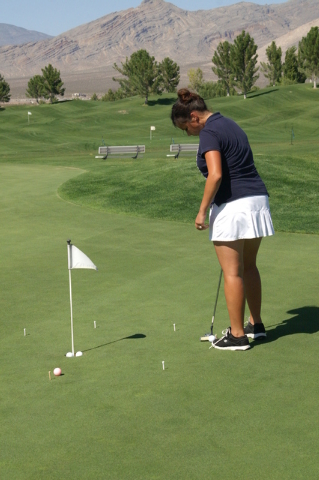 The Lady Trojans golf team this year is headed by Trojans Coach Bob Hopkins. Hopkins is no stranger with the girls team. He and Julie Floyd had coached together before and produced a top-notch team. Also in 1980, Hopkins again coached both girls and boys in South Dakota.

Hopkins is being assisted by assistant Steve Nygard and volunteer coach, Frank Cox.

This year the girls have a strong chance of qualifying a state team. Last year Jayde Woodworth and Natalie King qualified for state, but Hopkins believes he has the team that could qualify two or three more girls.

Berry is a junior this year and should also be in the running for state as well as sophomore Riley Moore.

“To qualify for state we need to average 102 for four girls,” Hopkins said. “Right now we are not there yet. Jayde is at 100, Berry is at 113, Natalie is at 102, sophomore Riley Moore is at 110. The big thing right now is confidence. A lot of the girls hit well at home, but now they have to take that to the course. They do well here but freeze up at other courses. The only way they can get better is by playing,” Hopkins said.

The coach believes he can achieve consistent play through selective club choice. “I want them to use one club and hit it for 150 yards. I told them to empty out their bags and just take the clubs they use. They are working hard. Our first match is at Las Vegas municipal, which is an easy course and then our next match is at home. Those are the two courses we should do well on. I am hopeful these girls will get better,” he said.

Last year’s team had only six girls and this year Hopkins doubled the numbers to 13. He added a few girls like Kaitlin Deweese, who is a new player to the team. “I came out because I have friends on the team and they convinced me to come out and play,” she said. Another new player is senior Kelbie Middleton, who runs track.

Berry worked hard over the summer to improve her game. She did this by participating in all but two Pahrump Valley Junior Golf tournaments over the summer. “I improved a lot over the summer. I think my driving improved the most. I think I need to work on my chipping and approaches to the green more,” she said.

Chipping and putting is what Hopkins believes wins golf matches. “That’s your scoring shots,” the coach said. “That’s how you get to be a good player. There are some girls that are striking the ball well, but we are a little raw still. For Courtney, she has to chip better. Right now the team as a whole uses too many strokes around the green.”

Hopkins’ plan for his team is to get the top girls to play bogey golf and then the others would not have to come down too much. “Bogey golf for the girls is in the nineties. Our goal is to qualify a team to state. I think the girls will be competing each week to qualify to make the team to play. This competition is good. It makes them better,” he remarked.

The girls were at Bishop Gorman on Tuesday, which was too late to report.