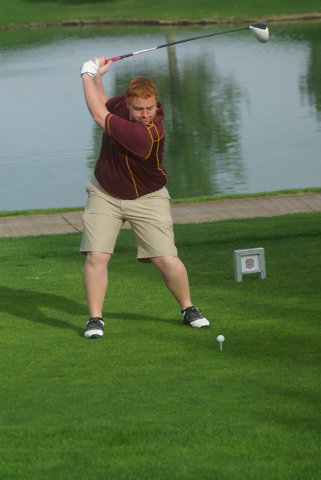 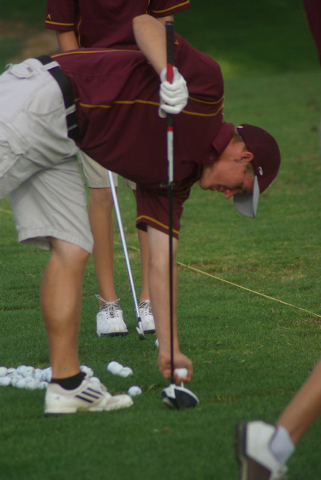 It was a picture-perfect day to be at Mountain Falls Golf Course in Pahrump last Friday as the Trojans Golf team hosted the annual Pahrump Invitational, which had sixteen teams and 108 individual golfers in all.

This year the tournament had a little more weight because the state finals will be held at this same course on May 21-22.

Golf teams from all over the state came to town so that they could gain valuable experience prior to the state championship.

The Palo Verde Panthers won the invitational with the help of Brandon Bauman, who shot a 69 on Friday. The Arbor View Aggies were a close second.

The Aggies top golfer, Sam Dickey, shot a 71 on Friday and ended up two strokes ahead of Bauman to take the individual title.

“Sam Dickey was sick a couple of weeks ago and he just finally yesterday felt he was hitting the ball better again. On the back nine on Thursday, he had a 32. He is a tireless worker, great kid and teammate. Yesterday he really built up his confidence and we are really looking to see how he does today,” Fish said early on Friday morning before the second round of play.

The Trojans golf team finished second in their flight to Browley Union from California with a score of 709. Trojans Golf Coach Bob Hopkins believed his team should have done better.

“I expected our scores to be better since this is our home course. We played badly,” Hopkins said on Friday in frustration after just one round of play.

Trojans Golfer Austen Ancell talked about some of the problems he had on his home course his first day.

He carded an 86 the first day and was not satisfied with that.

“I couldn’t keep my driver in the fairway. It was left and right and not where I wanted it to go. I ended up having to use hybrids on most of the T-shots, which made me have a longer second shot,” he said.