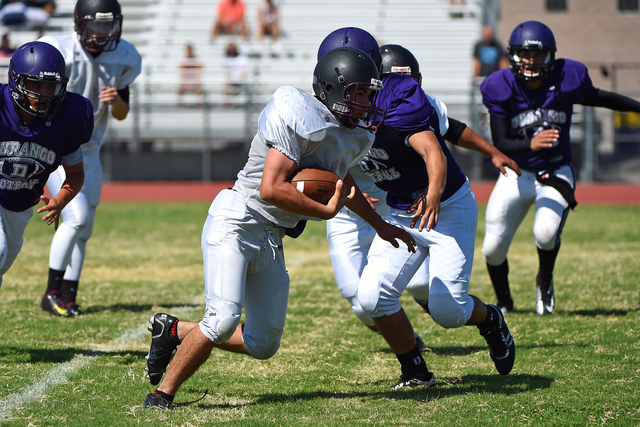 The Trojans are ready for the first game of the season on Friday night at 7 p.m. after a strong scrimmage with the Durango Trailblazers last Saturday.

At the scrimmage, the Trojan varsity football team set a new definition for scrimmage, with their grit and determination and well-organized, fluid teamwork. Scrimmages in general are far more chaotic by definition and the Trojans were far from that. The Trojans’ dedicated early-morning and afternoon workouts and summer conditioning seemed like it paid off.

It is against the rules to score a scrimmage, but when the Trojans stepped up to the line they clearly ruled the field, starting with a touchdown in the first play, a rushing play. The plays were precision works that were sharp and crisp. It was like the Trojans had been playing together for a lifetime.

Trojans Coach Joe Clayton was very pleased with the performance of the three Trojans teams the varsity, junior varsity and “B” teams. He noted the Trojan teams executed the brief plays like they wanted to, without giving up their playbook.

Clayton said, “We had a few mistakes, but I am confident those mistakes will be well fixed before Friday.” He was pleased with how smoothly the offense ran their plays.

Clayton said the Trojan varsity team has a really big and experienced offense front group and he said it was good to receive some compliments from the other side on his line. “Receiving other coaching staff compliments is a real confidence builder,” he said.

Over the past few years the defensive backs were part of the Trojans weakest part of the defense; however, they showed some improvement with three interceptions on the day.

The future players for the varsity team also came out to practice.

The junior varsity team also played well and ended well, with the defense vigorously pushing in and sacking the quarterback in the last play.

B team coach Mark Duvall commented, “Our defense played an incredible game and they ran the ball well on offense.”

The team will be up against the Bonanza Bengals this week, who were 3-6 in a tough conference last year that included Bishop Gorman, Legacy and Centennial.

This year Bonanza will be breaking in a new QB and some new running backs. The Bengals had one other quarterback listed with playing experience on last year’s roster, Justin Nakata and he graduated last year. This means the Bengals will be using a junior varsity quarterback from last year with no listed varsity experience.

The Bengals graduated 26 seniors out of 36 players on their roster. The line will be made up of inexperienced players which translates into a strong rushing game for the Trojans.

Offensively, look for running backs Sam Tucsnak, Tommy Gascoigne, Deon Estes and Keenan Harris to have some big yards. Tucsnak and Gascoigne should have some good running lanes inside behind the big offensive line.

Both backs are gone, but expect the Bengals to continue their rushing ways because they will have an untested quarterback.

This should play into the Trojans’ hands who have a strong front line and veteran defensive ends. Look for the Trojans to stop the run up the middle with their line and force the run to the sidelines.

The Trojans will be slow to score, but look for a high score, 35-20 Trojans.