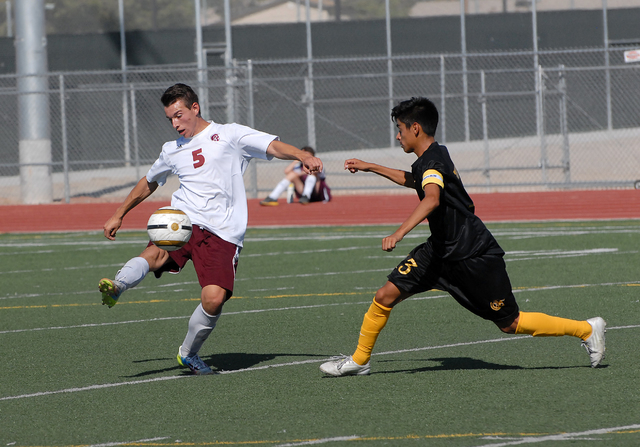 The Trojans mens soccer team is in downward spiral. They have lost four league games in a row and are 0-5.

The Trojans have 10 seniors on the team and Trojans Coach Don Boulden feels with all the experience the team should be in the run for the playoffs.

So why is the team in this spiral?

Boulden feels there is more than one cause for the team slide.

“Hurdles have plagued our path along our journey. The first being the loss of Oregon Junior transfer student, defensive sweeper, Kenyan McCrae. He has been banned by the NIAA from participating in all sports at PVHS due to a regulation barring temporary guardianship of his parents in the name of protecting Nevada’s youth by preventing recruiting efforts within Clark County,” the coach said.

The Trojans have also been battling injuries.

“Injuries of key players is the next thing to strike that has affected our team’s performance,” he explained. “Our returning senior defensive sweeper and striker Joshua Mortensen will not be allowed to return for the season due to an ankle injury during our match against Spring Valley.”

Finally, the coach said the morale has sunk really low with the team.

“Team morale has become a cancer to infect the hearts. Player’s faith that once was dripping from the tip of the Trojan sword from the hunger of a conference invitation has dried up and led to unnecessary doubt in each of their abilities to overcome yet what would look to be another losing league season for the PVHS Trojans,” Boulden lamented.

The team faced Sierra Vista on Tuesday, which was too late to report.

They lost to Spring Valley, Western and Clark.

Boulden believes his team still can turn things around.

“I believe this team has what it takes. From the first time I saw them play, watching from the touchline during their freshman year, I remember thinking what a privilege and opportunity any coach would have to organize this group of young men. It was my dream to do just that,” the coach said.