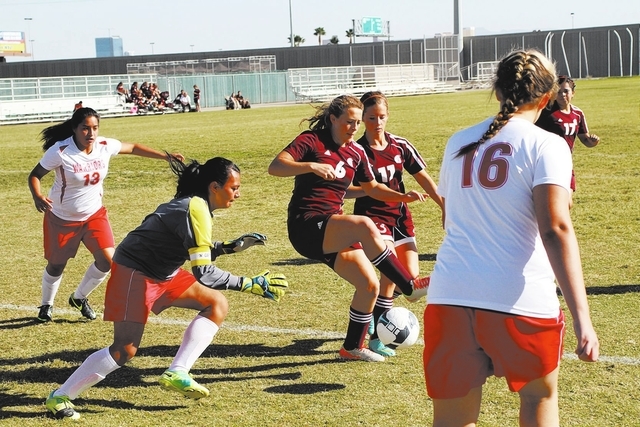 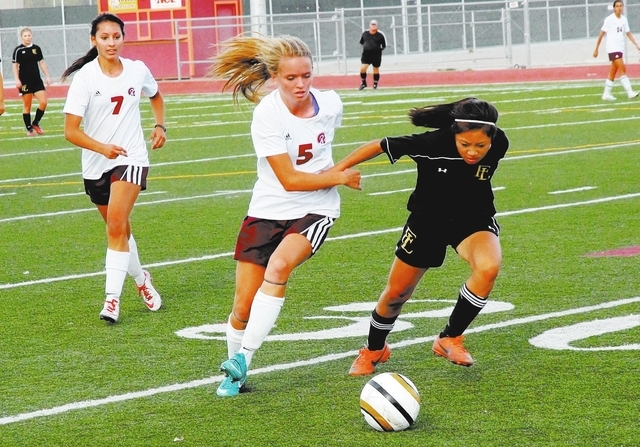 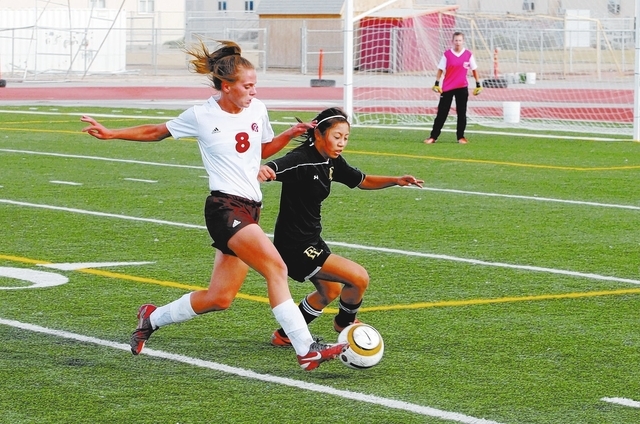 The Trojans battled the Faith Lutheran Crusaders to a disappointing 0-0 tie. It was disappointing not because the Lady Trojans did not perform, they were outstanding. The outcome of the game was just frustrating.

The Faith team was undefeated like the Trojans so it was a battle of two tough teams.

The Trojans were coming off a one-sided rout of Western, the Trojans beat Western 11-0 last Thursday. Two key Trojans did not play in the Western game, Lexi Smith and Gabby Vasquez were out.

Vasquez brings speed to the game and is another player that can score quickly. She re-injured her ankle against Clark and will not be back in the lineup until maybe the Cheyenne game. Her offensive game was missed on Monday according to Trojans Coach Pam Larmouth.

Despite the pain, Smith was cleared for the game against Faith. During the game it was noticeable she could not run fast and that she was in a lot of pain. Even Smith at half speed was effective in slowing the Crusaders.

She said she has internal bleeding from ovarian cysts which popped, causing her a lot of pain.

“I had a deep bone bruise, but the pain comes from the bruise rubbing on the bone and I also have the ovary problem. So when they get hit they pop. It hurts but I needed to play today. I just could not run very well. As long as I am playing I will do anything, but it was not my best game,” she said.

When she threw the ball in Smith could not use her whole body, “it was just arms.” She said she will not play at all until she is healed and she will be doing physical therapy and keeping in shape at home. She expects to be back for the next Faith game at the end of the month.

“We are just not going to take any chances with Smith and Vasquez,” Larmouth said.

Larmouth missed Vasquez being in the lineup, but the Trojans began to wear on the Crusaders in the second half of play. The Trojans had far more shots on goal than Faith and it looked like the Trojans would win the game.

“We did not change anything at the half. We are just trying to be first to the ball and be aggressive to the ball. If you noticed, we were starting to play our game during the second half. I will take that all day long. They can pass up there and shoot all the time and we will take it all the time,” Larmouth said.

The coach questioned some calls the refs made during Monday’s game and she said when they have bad calls she said, “those can be game changers.”

Paige Chaffee, who is a new offensive weapon with the Trojans, played a very aggressive game and was knocked around by the Faith players. Of course, she gave out a few knocks herself. She scored two goals against Western and three against Clark.

“I am tired and I definitely felt how physical they were,” she said.

Maddy Pereira is a new member to the team and plays defense. She survived her first game against Faith.

“I am the only freshman on varsity, so there is a lot of pressure on me. I like it when the upperclassmen tell me what to do, it helps a lot on the field. I learn from my mistakes. The more you get into the game, the less nervous you become,” she said.

No stats for Faith game. Goals and assists for Western game:

Sydney Sladek has 32 goals on the year.