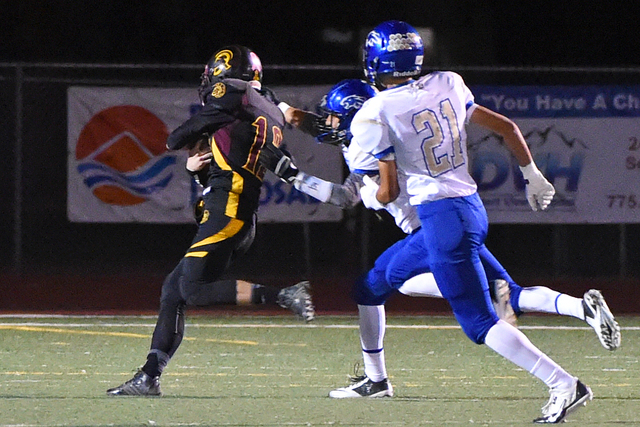 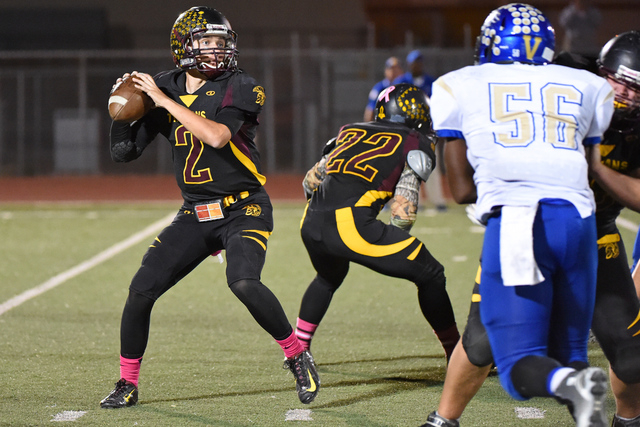 The Trojans upset second place Sierra Vista with great passing and solid defense in the second half. Pahrump (4-5 overall, 3-4 Sunset League) hosted the Mountain Lions (6-3, 4-3) in the last game of the season and won 39-27.

The Trojans, ability to pass for the big play helped Pahrump put points on the board. Trojans quarterback TJ Milk threw for 194-yards passing and two touchdowns. He was 10-14 on the evening. His longest pass was a 65-yard touchdown in the first quarter to Devlin Dillon for the Trojans’ first touchdown.

Trojans Coach Joe Clayton knew going into the game that Milk would be able to pass.

“We studied the film and saw they didn’t defend against the pass too well. Also we haven’t passed too well in the last two games so with the film they did not see us pass,” Clayton said.

As far as the defense, the statistics were in Pahrump’s favor. The team knew going into the game that they could stop the Mountain Lion running game.

Faith Lutheran (6-3, 5-2) ended up in the No. 1 spot. Sierra Vista finished the season in a five-way tie for second, despite the loss. After the tie breakers were applied, Sierra Vista remained No.2, Cheyenne is the No. 3 spot and Spring Valley is the No. 4. Mojave and Clark also had 4-3 records but were left out of the playoffs.

The win gives Trojans Coach Joe Clayton his first four-win season in his three-year run with the team. It was also the first time in recent history that the Trojans won all four home games.

Trojans Coach Joe Clayton gave credit to the four wins this season to his team.

“We have been really excited about this group,” he said. “This is the most experienced group that has ever come to Pahrump. I started Pop Warner here in Pahrump for this reason. No question that these players have more experience than any other football players to come through here in 40 years because of Pop Warner. This was the first group and it shows.”

Penalties did play a big role in the game and both coaches expressed anger over the amount of penalties called against each team.

Sierra Vista took the ball 50 yards down the field and scored on their first possession. They scored on a 45-yard touchdown run in the first five minutes of the game.

Pahrump took some time to warm up but scored on their second possession. On first down, the Trojans throw a 75-yard pass to Dillon who is tackled near the 10-yard line. On fourth and goal the Trojans fumble in the end zone and recover for the touchdown to tie the game.

At the start of the second, Pahrump stopped the Mountain Lions and got the ball on the 40-yard line. Jeremiah England takes the ball from a 20-yard pass by Milk to the 32-yard line. This sets up another Pahrump touchdown. Trojans’ Dillon catches a 20-yard touchdown pass to make the score 14-7.

Sierra Vista tied the game and then Pahrump scored again through the air on an England 20-yard reception in the end zone. The half ends 20-14, Trojans.

In the second half, the Trojans scored on the opening drive with Tommy Gascoigne going in for the touchdown to make it 26-14 with 5:10 left in the third.

Sierra Vista then took the lead on two straight touchdowns in a row. The second score came on a fumbled kickoff return by Pahrump. The Mountain Lions go up 27-26 with three minutes to go in the third.

At this point, the Pahrump defense stiffens and stops a crucial Sierra Vista drive with 10:15 to go in the game.

The Trojans started on their own 17-yard line and did what they have done all year long. They marched the ball down the field and ate clock. They passed midfield, converted a fourth down and five and then gave the ball to Devin Wood. Wood took the ball around the end for a 35-yard touchdown run to make the score 32-27 with 3:23 to go.

The Mountain Lions threatened one last time with the ball at midfield. The defense kicked in and sacked the Sierra Vista quarterback twice. England gets the second sack and causes the Mountain Lion quarterback to fumble the ball. Senior Jeremey Coates then took the ball for a 44 yard touchdown run to end the game, 39-27. It was his first touchdown.

England had to go a long way to bring the quarterback down, but being tired was far from his mind.

“Our coach told us to keep bringing it,” he said. “I looked at the clock and said this is it. This could be my last game ever. I just kept bringing it every play. Defense has been decent all year. It was close. We just came together as a team and said we got to get it done.”

Coates was still a bit winded after the game as he commented on his run.

“I really am not sure how I feel about it,” he said still trying to catch his breath. “I blacked out and said to myself, ‘Just don’t catch me.’ I knew we were going to win because we are in Pahrump. That is just what we do here. Only Trojans win here.”

The Sierra Vista head coach did not think so and was seen yelling and screaming at the referees after the game.