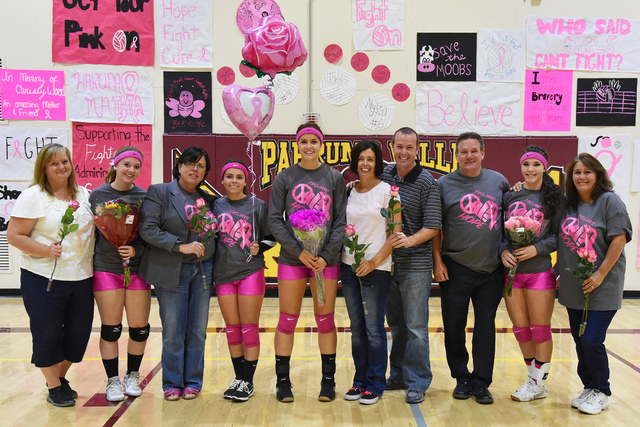 The Trojans easily won over Clark, but for the four seniors on the team it was a night to remember not because of the win but because it was time to say goodbye to the game they love. Four seniors from the Trojans volleyball team were honored during the Clark game last Wednesday on senior night.

Murphy wears No. 6 and over the years has played three sports — volleyball, basketball and softball. She has built a reputation over the years for being a player that hustles. All her coaches have said that she gives over 100 percent on the court and the field. In volleyball she has a great serve and she is known for getting to the ball.

Dance is No. 9 on the team. She started playing volleyball in middle school and started for the Trojans volleyball team as a freshman. She has slowly worked her way up to being a premier blocker and an above-average hitter. Dance has played volleyball for seven years. When asked about her favorite year playing volleyball, Shayla said, “I enjoyed my sophomore year where I played middle blocker only, but this year I played middle and side and I got good at mixing both of them and really enjoyed it — probably this year was my favorite.”

She said she wasn’t interested in seeking a scholarship for college but she might play intramural if they have a team. Dance enjoyed the first Mojave home game the most. When asked what she would miss most about playing on the volleyball team Shayla answered, “Probably some of the best were the rides home on the bus with the team, my teammates, and my coach.”

Kingsley is No. 13 and has played volleyball for seven years. Harris has given her a bigger role because of her consistent serving. She said her favorite years playing volleyball were last year and this year.

She commented, “Playing volleyball last year was fun because we did so well as a team. This year was really fun because we got so close as a team and we’re all really friendly. It’s hard to pick a favorite game we played this year because they all blend together. I feel like some of them we played a lot better than others. Even if we didn’t win, but we played well. I think the best game was Sierra Vista at home because it was our second home game this year.” When asked what she will miss most about playing volleyball, she said it would be playing with her teammates. She said she would probably play intramural at college.

Altiero is No. 4 and has played volleyball since 6th grade. She started working herself onto the varsity squad as a sophomore. Harris liked the fact that she could dig the ball well and serve.

When asked about her favorite game of the season, Altiero gave an emphatic answer, “The first Mojave game, a home game. We played really intense. We were mad about some of the calls, but we played great.” She said she would miss the girls on the team. Samantha said she planned to go to college and would focus on school and not play volleyball.