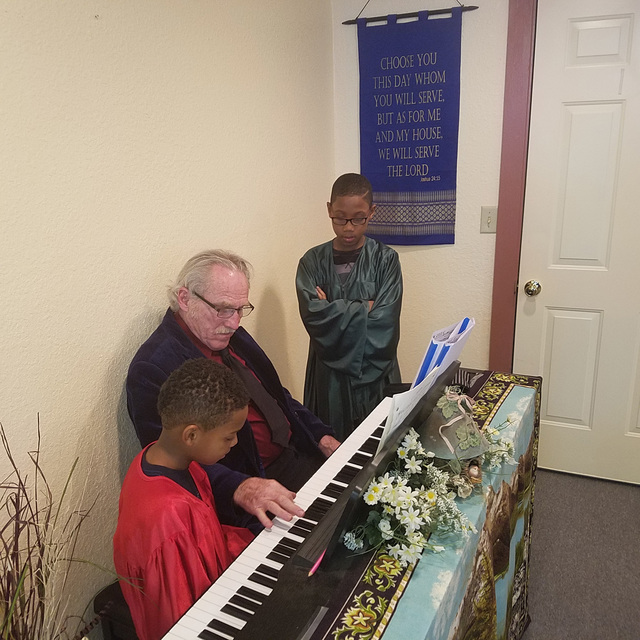 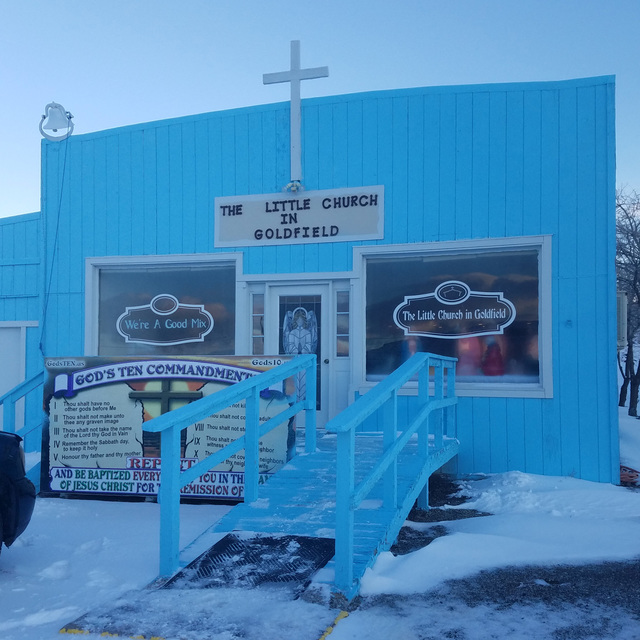 Snow sits outside the Little Church in Goldfield prior to the Christmas program on Dec. 24. David Jacobs/Times-Bonanza & Goldfield News

For those looking for a mix of faith, music, family and community, The Little Church in Goldfield was a place to be Christmas Eve.

The church played host to a Christmas program. Activities included a play, “Joy,” featuring children in the community, music, worship and more, such as a potluck dinner. The menu included tacos, enchiladas, sweet potato pie, apple pie and cookies.

“We’re having our Christmas play, a nice Christmas vigil this evening with candlelight, with caroling and a nice dinner after the service,” church Pastor Rod Broadnax said in previewing the event as church members made final preparations late Christmas Eve afternoon.

Broadnax, who is superintendent of Esmeralda County Schools, became the church’s pastor about four months ago.

“I’m so glad that we’re putting this together,” he said of the Christmas activities that were free and open to the public. “It’s great for the community, for the church, for the kids.”

“Joy to the world, the Lord has come,” Broadnax said in previewing his Christmas message. “Jesus is the reason for our season.”

Broadnax’s wife, Juanita, also is active in the church, serving as a church elder.

“I think it’s great the kids are learning about the birth of Jesus Christ and his life and his history,” she said of the Christmas play and program. “I think that’s a wonderful thing.”

Assisting with the play as a musician was James Dilworth Sr. He came from his Reno home to Goldfield. His son, James Dilworth Jr., lives in Goldfield, teaches at the community’s school and wrote the church’s Christmas play.

“I think it’s wonderful that they’re willing to do this,” the elder Dilworth said of the church and its participants, who faced slick road conditions from that day’s snowstorm.

“Basically, the Christmas story, that kind of thing,” Dilworth Jr. said of the play’s theme, which was being included as part of that evening’s service.

“The message is you’re going to bring room for Jesus,” Dilworth Jr. said. “You’re going to be open to that and become who and what God and Jesus want you to be.”

The church, which includes a spacious sanctuary, is at Columbia and Crystal avenues.

“We’re moving in the right direction, moving in a great direction,” said Broadnax, the pastor. “I think we’re going to be doing some very good things coming into 2017. By this time in 2017, we’re hoping that Christmas here is amazing.”

The church is Baptist-oriented but is moving toward a non-denominational direction, he said.

“Come out and join us every Sunday with Bible study, starting at 9:30 a.m. and morning worship, starting at 11 a.m.,” Broadnax said.

“Anything that we can do to bring people,” he said. “We’re trying to build our membership up …This is a good way of doing that.”

“Our philosophy is that anyone who comes through the door is considered a member,” Arnold said. “They’re welcome, no matter what.”