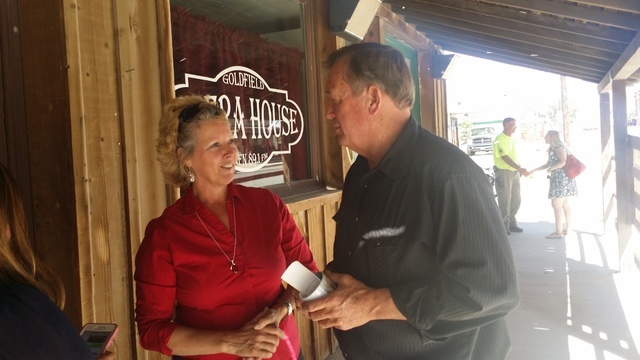 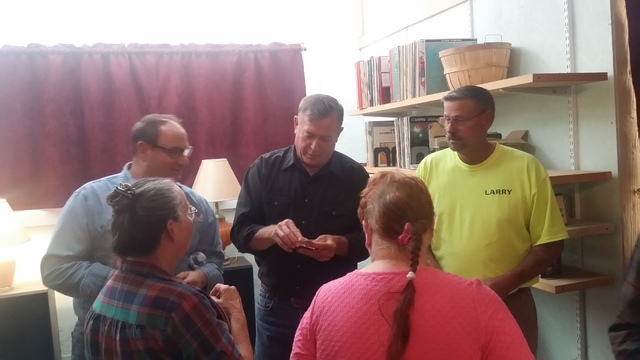 GOLDFIELD – U.S. Rep. Cresent Hardy kicked off his November re-election campaign with stops June 17-18 along the U.S. Highway 95 corridor, visits that included a Tonopah event and what’s described as a historic meet-and-greet in Goldfield.

Hardy, R-Mesquite, who is seeking a second term, was told he is the first sitting U.S. House member in memory to hold an event in Goldfield.

“I am a representative of the people,” Hardy of Nevada’s 4th Congressional District told the group June 18 in the newly opened Goldfield Opera House. “I will never forget that.”

He said that as a House member he represents the masses but works to “never leave the minority behind.”

Hardy fielded questions for at least an hour from the crowd of about 20 residents and business owners concerned about Goldfield’s future, including its economy.

Topics of concern by residents included:

■ The lack of nearby hospital care resulting from last summer’s closure of Nye Regional Medical Center in Tonopah.

■ Interest by locals in reopening an airstrip in Goldfield so that emergency medical care aircraft can land to help the sick and injured.

■ Promoting Goldfield as a historic destination for tourism, helping bolster the economy.

■ Future construction of Interstate 11 through Nevada and its possible route, which remains to be finalized.

■ Getting the Federal Communications Commission to take action leading to more radio stations in Tonopah and Goldfield.

Instead, Hardy emphasized a message that focused on resolving individual constituent issues and a focus on allowing the state government to handle issues involving Nevada, as opposed to federal government expansion.

“Dollars are tight and getting tighter,” Hardy said of federal financial resources at one point.

Hardy spoke optimistically of the possibilities for rural communities.

“With economic opportunities, every community can grow,” he said.

Talking with the congressman

In an interview, Hardy said providing medical assistance to rural communities stood out as a key concern in his rural Nevada stops.

“I think everybody I’ve talked to in every community has the same challenges,” he said. “It’s probably the No. 1 issue that’s out there right now.”

As far as serving residents in the district, Hardy said that last year, his office had resolved more than 400 cases.

“Two hundred of those were veterans’ issues. The others are Social Security issues, Medicare, Medicaid, driver’s license issues. We brought about a half-million dollars to people’s pockets that was due, that they deserved to have, the benefit, without having to fight for it.”

In the interview, Hardy also was asked about federal gun control legislation in the aftermath of the June 12 mass shooting in Orlando, Florida where 49 were killed. “I’d have to look at the legislation to see where I’m at on the situation with it,” he said.

“I feel very horrible about this tragedy in Orlando, and it’s sad that things like this happen,” Hardy also said. “But this is a national security issue, not a gun-control issue.

“This is a homeland security issue, something that should never happen,” Hardy said, also expressing sympathy for the victims’ families.

“The LGBT community should have never been targeted,” he said. “I feel bad that that happened. I’m a firm believer that we’re all people under God.”