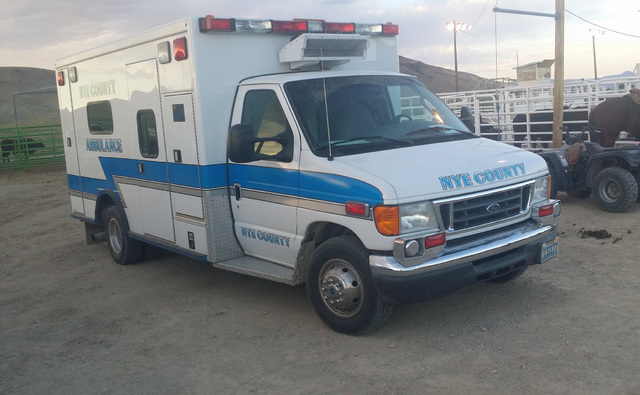 A look at a Nye County ambulance as shown in a July photo taken at the Tonopah Rodeo Grounds. The ambulance service is described in danger of collapse without support due to declining numbers of volunteers and other challenges. David Jacobs/Times-Bonanza & Goldfield News

A look at a Nye County ambulance as shown in a July photo taken at the Tonopah Rodeo Grounds. The ambulance service is described in danger of collapse without support due to declining numbers of volunteers and other challenges. David Jacobs/Times-Bonanza & Goldfield News 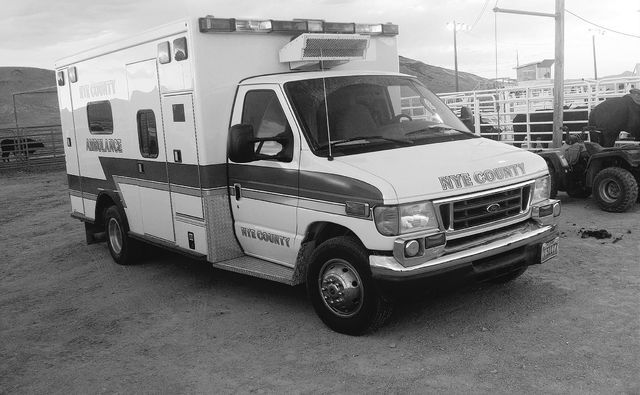 Do Tonopah residents want an ambulance?

Editor’s note: This is part of a continuing series of stories in the Tonopah Times-Bonanza & Goldfield News, looking at challenges facing rural medicine in the region with the closure last year of Tonopah’s hospital.

When it comes to ambulance service for the Tonopah area, what do residents want? Do they even want one?

“There’s a lot of choices in America, and one of those choices is no ambulance service,” said Vance Payne, Nye County Emergency Management director. “Did you know — this has stunned me — that in all 50 states there is no law that says you have to have an ambulance service?”

“There is a law that says you have to have a fire department, but not one for EMS,” he said. “That’s confusing.”

“This is a very tough spot where we’re at right now,” he said.

Much of the problem is traced to the closure of Nye Regional Medical Center in Tonopah in August 2015. Volunteer ambulance crews now need to take patients more than 100 miles to Bishop, California or Hawthorne in Mineral County for care. The round-trips for the ambulance crews can span four to six hours, taking the volunteers away from their jobs, families and homes.

Countywide, the number of volunteer ambulance staffers has fallen in about half since Nye Regional’s closure, resulting what’s being called a “delicate, fragile system.”

Other communities in Nye County that used to rely on the Tonopah hospital also are affected. Smoky Valley ambulance crews are taking the ill or injured as far away as Fallon or Battle Mountain.

“This is a big deal, and it’s not just Tonopah,” Payne said. “This is over our whole county.”

The “simple answer,” he said in Tonopah, is “more volunteers.”

“That sounds pretty crappy to me,” Payne said. “I’m almost embarrassed to say it. But that’s the system that we have. That’s where we’re at.”

Payne is encouraging residents to offer suggestions on what they want when it comes to ambulance service, assuming they want an ambulance to start with.

Ambulance reports currently received by Nye County “is giving us a little snapshot” but they do not necessarily detail who the customers are,” he said. “And it most definitely does not tell me what our customers want.”

“At the end of the day for me personally, I want to see the highest level of pre-hospital emergency care that can be provided, and I’d like to see it higher than most places because our communities deserve it,” he said.

Payne is outlining some choices residents have when it comes to the level of ambulance service.

“You can have a pickup truck, basically, and throw somebody in the back, haul them to the hospital. That is one way of doing it. We can have service that we are trying to provide now, which is a combination of basic EMTs and advanced EMTs. These people have the capability of giving you a damn good chance of surviving on the way to the hospital.”

“If you want a little bit more, we could kick it up to a paramedic level,” Payne said.

Officials such as Payne, Nye County Commissioner Lorinda Wichman and Nevada Assemblyman James Oscarson, R-Pahrump, are active behind the scenes in the state capital of Carson City.

“We are working, trying to get help in the form of a new model that we can put a dollar amount to where I can give you a very educated idea — or better than an idea — an educated description of what it would cost to have different levels of service,” Payne told the workshop crowd. “I don’t choose those. You do.”

Additionally, Payne said the reason he asked for help in Carson City is that “this solution needs to have the support of our state government, which can be in the form of policies.”

He indicated that the “new model” could have statewide implications in the form a new EMS system for Nevada.

“We’re not Reno and we’re not Vegas, but we’re held to the same standards,” Payne said. “Legislatively, we have to look broader and cast broader because whatever solution we come up is going to be favored by 13 other (rural) counties because we are not alone in this.”

In the meantime, he urges Tonopah and county residents to be active in the ambulance issue.

“We have the ear of Carson City. They are listening to what is going on. I highly recommend that if you have an opinion, that you voice that opinion at whatever level of the government you believe is necessary.”

■ Those with suggestions, comments, or interested in getting involved in the Nye County ambulance service are encouraged to contact Nye County at 775-751-4278 or email demdo@co.nye.nv.us.