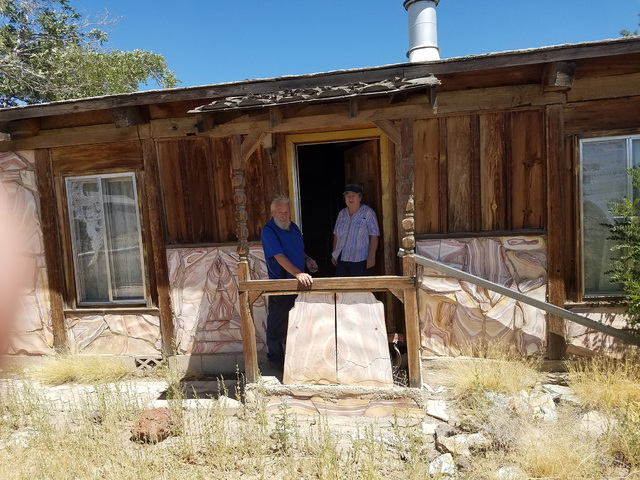 Aldo Mazzella and his wife Carol as shown Aug. 6 in the house they bought earlier that day for $27,000 at the Goldfield Days land auction held outside the Esmeralda County Courthouse. The Mazzellas describe the Goldfield home as a time capsule when they entered it for the first time that day. They found old 78 r.p.m. records and a rotary dial telephone. The home was described as in good shape. A 1960s Ford station wagon with a license plate expiration date of April 1986 was found outside the home. David Jacobs/Times-Bonanza & Goldfield News

Aldo Mazzella had been eyeing a particular home to possibly buy in Goldfield.

On Aug. 6, after a brief bidding war, he got another chance during the 2016 Goldfield Days annual land auction. With his $27,000 bid, he bought the single-family home on a double lot at the corner of Franklin and Meyers avenues.

Bidding outside the Esmeralda County Courthouse had started at $16,000 for the home, the only house in the auction.

“We walked around and looked at it 16 years ago when it was for sale,” recalled Mazzella, a retired geophysicist who splits his time between Las Vegas and Goldfield.

He called the 2016 purchase “a gamble” because this time, he was not able go inside prior to the auction.

“We’re not quite sure what the condition is inside,” Mazzella said. “They didn’t have it unlocked so it’s a gamble. It’s just like (when) I bought a gold mine a number of years ago. It’s always a gamble …I’m still exploring it (mine), 20 acres. It had been ranch at one time, too. It’s a patented mining claim in the old district.”

Within a short time of this year’s land auction ending, Mazzella and his wife Carol, got to take a look inside their home. It apparently had not been occupied in many years, possibly up to a couple of decades.

Inside were old 78-rpm records, a rotary dial telephone, a pull-down light on a cord attached to the ceiling, a wall of old books and a television.

Appliances appeared to date back to the early 1970s based on the color pattern from that era. “When we were married, you had a choice between avocado and (harvest gold) for your appliances,” Carol Mazzella said. “Now everything is stainless steel, right? This has got harvest gold appliances.”

Mining equipment was in the backyard. The home also includes a basement. “It’s so full of cobwebs we can’t go in there yet,” Carol Mazzella said.

Outside the home was a 1960s Ford station wagon, with a license plate registration sticker expiration date of April 1986.

The Mazzellas are regulars in the Goldfield land auction, taking part for 16 years.

“We’re still fixing up our other properties here, and now I’ve got this one,” Aldo Mazzella said. “It may go to my daughter and her husband and my grandson. They’ve got ATVs and like to come up.”

“The cabin we bought a number of years ago,” he said. “It was 110 years old, and everybody said it was terrible, and we’ve been restoring it, trying to keep its original character.”

Carol Mazzella said the couple bought the cabin at the Goldfield land auction eight years ago. “We’ve been working on it ever since,” she said.

She said she was excited about the latest purchase, the single-family home.

“We bought it for extra family. Our cabin is pretty small.”