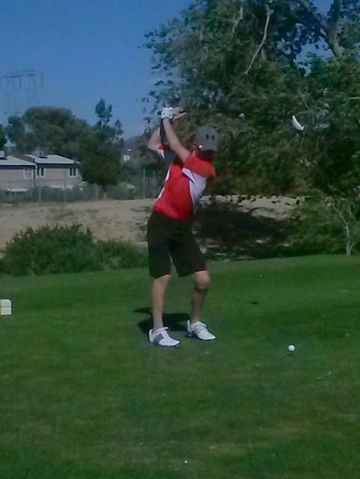 No, golf is not like any other sport. People aren’t cheering in the stands as a golfer drives the ball down the course.

Whether or not you think it’s the sport for you, it is popular in Nye County.

Things are happening in golf in Nye County. I mean more kids are playing the game. I thought about this during the summer as I watched the kids play in 105-degree heat. Boy, if that’s not dedication to the game. The numbers aren’t so bad in Tonopah either.

I think it’s a great way to just go out and be outside.

Oh, and kudos to the parents who take time to spend time with their kids on the course during the summer in the heat.

The senior golf crowd deserves credit too. The seniors of course also help keep our golf courses going out here. They can be seen golfing when it is freezing cold or when it’s 115 outside.

Nye County has a lot of golf fundraisers also and they are all popular. Recently the Bill Becko Memorial, U-Turn for Christ had one and so did Desert View Hospital in Pahrump.

The Becko Tournament raises money for a Nye County scholarship fund that sends kids to college. The foundation has raised nearly $100,000 in scholarship money.

The Tonopah golf team has come a long way. Shoot, the team doesn’t even have a course to play on in Tonopah, but still has a team thanks to the efforts of the school district and Muckers coach Robert Otteson. They built the team a driving range and putting green to practice on. That is dedication.

I think what is popular about this sport is the whole family can do it. Trojans golfer Austen Ancell and last year’s individual Division I-A Nevada State Champion told me his family golfs together as a family. In Tonopah, nearly the whole Otteson clan spends time on the course.

“Me, my wife Penny – (THS Girls Golf Coach), my daughter Shanda, Denver (an accomplished golfer), and Tanner. Breton and Tristan are my cousins,” Otteson said. “We have a lot of golfers in our immediate family. Tristan’s sister also plays for THS girls golf.”

Last year Robert Otteson’s son, Tanner Otteson, went to state in golf. His other son, Denver was a professional golfer.

Despite the popularity of golf in the county, there are a few who still trash-talk the sport and say it isn’t a sport. I get it. I have fallen asleep to many televised golf matches and this was when legends such as Arnold Palmer and Jack Nicklaus were playing. So, don’t lecture me on the snore factor.

Regardless of what you think of the entertainment factor, it is a sport. I guess people have to play 18 holes at Mountain Falls or in Round Mountain to really appreciate the benefits. Tell me then how the game is not a sport. You will feel that burn.

Golf isn’t exactly easy. It takes a lot of energy and uses the majority of the muscles in your body to swing a club.

According to Robert Otteson, golfers who play 18 holes, like most of our high school tournaments, pack their clubs, 15-30 pounds and walk approximately four to five miles.

Finally, golf also is the fastest growing sport in America, and golf is a $76 billion annual industry with over 25 million players.

“Over the last 10 years of coaching the golf team at THS, my best golfers were athletes in other sports,” the coach said. “Now I have had some golfers that have worked really hard so that they could get better and they become pretty good golfers but more often than not, my best golfers have been really good athletes overall.”

Otteson stresses golf can be a good recreational game also.

“I always tell my golfers that this is one sport that you can play for the rest of your life once you leave high school,” he said.

I know most people won’t be going out to purchase a set of clubs after reading this, but really, golf should be considered for its recreational and exercise value.