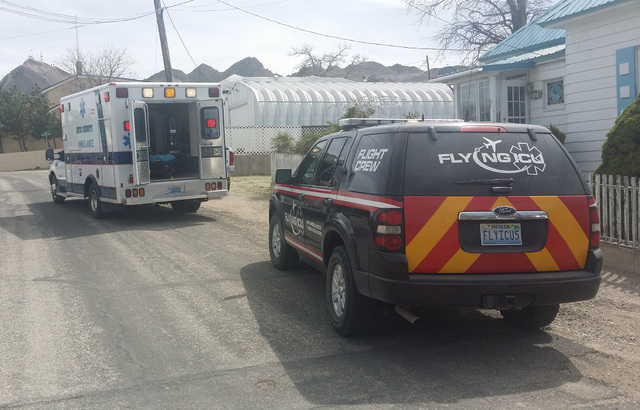 Life Guard is changing its operations in the Tonopah area. Life Guard plans to continue to offer medevac services as called upon by the volunteer ambulance services. It said it will service its private membership agreements with the Nye and Esmeralda counties citizens who signed up for the service. David Jacobs/Times-Bonanza & Goldfield News

Still coping with the closure of its hospital nearly a year ago, the Tonopah region got more bad news this week when it comes to emergency medical services.

“Life Guard International – Flying ICU has little choice but to withdraw its 24/7 medical evacuation services based in Tonopah, likely to take effect on or about August 8, 2016,” a company letter to Tonopah said.

Also, Life Guard International/Flying ICU, which has been helping Tonopah area volunteer ambulance crews by providing paramedic care on the ground to the injured and ill, is planning to continue that service only until Aug. 25, though it is offering an extension beyond that.

Costs are being cited.

Earlier this year, Symons Ambulance of Bishop, California ended service in the Tonopah area, citing losses of more than $15,000 a month here.

In a letter released Aug. 2, announcing its plans, Life Guard did not disclose its financial details. But the losses were between $30,000 and about $80,000 a month, Nye County officials have said in the past week. The company is a private entity and is not commenting on specific numbers.

“The investor’s group of Life Guard has been generous to the Tonopah and surrounding communities by allowing the Tonopah base to continue operations for a year in order to help with this health care crisis, even in the face of substantial financial loss,” the Las Vegas-based company said in its letter to Tonopah.

Nye Regional Medical Center was the only hospital within more than 100 miles of Tonopah. Its closure resulted in “eliminating all regional emergency medical access,” Life Guard said in its letter.

“An entire year has come to pass and there is still no end in sight to the health care crisis in Central Nevada. There have been no added resources or partners to ease the costs of continued operations, and after careful consideration we have come to realize that we have given Tonopah the strongest effort possible for a year but now we need to tend to the company as a whole.”

Life Guard said it is not abandoning Tonopah and plans to continue to offer medevac services as called upon by the volunteer ambulance services.

Nye Regional’s closure dates back to Aug. 21, 2015, but the effects continued.

Life Guard, which said it has been staffing that vehicle at no cost to Nye or Esmeralda counties, said it handled 136 medevac missions, made 83 ground ambulance responses and assisted law enforcement 12 times.

In an interview Aug. 2, Nye County Commissioner Lorinda Wichman said the county has no funds to pay Life Guard so that it can continue operating as is in the Tonopah region.

“Obviously, I’m heartbroken, but I cannot expect somebody to lose $30,000 a month and stay,” said Wichman, whose commission District I includes Tonopah.

That is separate from the soon-to-depart Life Guard crew and the county’s paid staff, Payne said, which totaled one full-time person and three part-time people.

Mutual aid also is available through Goldfield in Esmeralda County.

Though Wichman describes Life Guard as “absolutely critical at the moment,” opening an emergency room would assist the limited number of volunteer local ambulance crews whose ranks have plummeted since Nye Regional’s closure.

“These people have lives, they have jobs, they have families, they have kids,” Payne said at a July 27 public workshop in Tonopah. “It’s just killing folks. So they are either cutting back, or they’re actually having to leave the (ambulance) service.”

Payne also told the workshop crowd that a Life Guard official told him recently that it was losing about $80,000 a month here.

Wichman attended that public workshop July 27 in Tonopah. On Aug. 2, she said her impression from the crowd was that the current priority is to get an emergency room established in Tonopah.

“We don’t have enough money,” Wichman said. “We’re not generating enough annually to do that. We’re looking for ways to supplement that.”