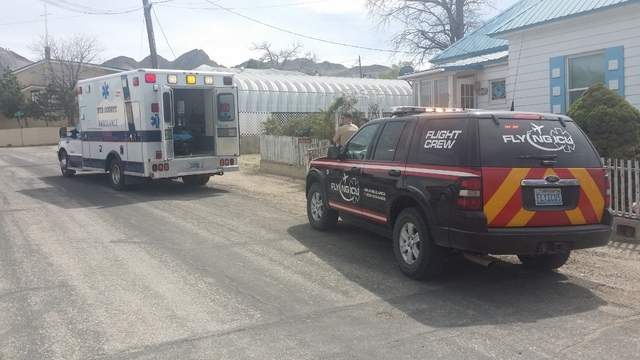 Recent changes to keep ambulance service in Tonopah are bringing renewed focus to emergency medical care for the entire region.

Saying it was losing money in Tonopah, Symons ambulance of Bishop, California, pulled out of the Tonopah area in early April.

Now Tonopah is relying on a team approach, that now includes Lifeguard International Inc. and its paramedic service, Nye County staff and mutual aid from Goldfield via neighboring Esmeralda County. This ambulance arrangement for Tonopah was put together in three hours the afternoon of April 8.

All of this comes just seven months after the closure of Tonopah’s hospital, Nye Regional Medical Center. That means the nearest hospital is more than 100 miles away in Hawthorne or in Bishop.

“The problem is much bigger than just Tonopah,” Nye County Emergency Management Director Vance Payne said. “That hospital closure has had a terrible effect on the whole region. It’s a huge story, I think. And believe me it’s being watched very closely from the highest levels at the state. This is very troublesome.”

“I worry sick about it,” Payne said. “That is kind of why we’re in this mess right now.”

Nye Regional’s closure is creating a ripple effect because ambulance crews now need to travel much further to get a patient to a hospital.

“We went from volunteer services that were making 15-minute responses to the (Tonopah) hospital,” he said. “Now these guys when they go on a call, and they have to go to a hospital, you’re talking turnaround time of five to seven hours.”

The time includes getting the patient to Hawthorne or Bishop, the volunteers returning to their home regions and completing other tasks such as paperwork.

“It’s just been a terrible burden on everybody,” Payne said, mentioning volunteers who leave their families or workplaces to help those in need.

In Tonopah, he describes the ripple effect, including a lack of volunteers.

“When the hospital closed, people in town quit using the ambulance service. When I brought Symons in to cover for our volunteers, then our income from the calls that go out went away. So it got us deeper and deeper in the hole.”

Beatty, Tonopah, Goldfield and Silver Peak are among the other communities feeling the impact of Nye Regional’s closure.

“Pick someplace,” Payne said. “Everyplace where people used to come to that (Tonopah) hospital, they all had to find a new place to go.”

“As an example, Smoky Valley used to drive into Tonopah to Nye Regional for the patients. Now they’re having to go to Fallon or to Battle Mountain. Just this past week, they had a single run that lasted seven hours. These people (volunteers) are leaving their jobs. How long are we going to be able to do this? That’s what’s scary. That’s the burden.”

Because of the lack of volunteers and pressure that was put on them, for example, Gabbs no longer has an ambulance service. “A lot of people say, ‘It’s only 350 people that live out there’ but I would say to you that that is a major, major deal,” Payne said.

“Now routinely they either go to Hawthorne or to Fallon, but still ambulance service is a pretty basic need that most people think about when they move to a community so I worry for our whole county.”

Nye County ambulance, Payne said, had been made up of five stations in Amargosa Valley, Beatty, Tonopah, Smoky Valley and Gabbs.

“Since the ambulance shut down, we don’t have enough personnel, we’re using a modified program currently in Gabbs and relying on mutual aid from either Tonopah or Fallon,” Payne said.

Gabbs, he said, is about an hour from Fallon and 90 minutes from Tonopah.

Payne said his responsibilities include all of Nye County.

“We are watching everything closely, working with the county commissioners and state EMS,” Payne said. “Things are working very good right now, but we want to make sure we’re developing plans …I don’t to call this unstable, because it’s not. But you always want to have a backup plan. And right now we’re all out of backup plans.”

In Tonopah, the new partnership with Lifeguard “is a big deal,” Payne said.

“That’s a critical-care paramedic,” he said. “They don’t grow on trees.”

“The rest of the towns in Nye County could only hope to have what Tonopah has,” Payne said.