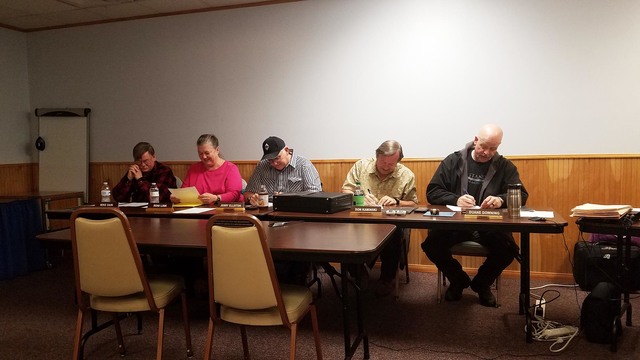 The Tonopah Town Board at Jan. 25 meeting in the convention center. The board was informed of changes that would be needed in its meetings as the result of information obtained during recent training on Nevada’s open meetings law. David Jacobs/ Times-Bonanza & Goldfield News

It turns out that the seating arrangement is not the only thing changing at Tonopah Town Board meetings.

The result could affect what you read in this newspaper regarding timeliness, and what you hear at town board meetings in the Tonopah Convention Center. It also will affect how long members of the public can speak.

At the latest meeting on Jan. 25, town Administrative Manager Chris Mulkerns detailed changes that would affect what’s discussed at the meetings and more.

With two new members on the five-member board, renewed training is underway so that the town remains compliant with Nevada’s open meetings law.

Out of that training through staff with the Nevada Attorney General’s Office, Mulkerns explained to the town board that changes are being recommended in how the board conducts its meetings.

In listening to Mulkerns, my take is that there won’t be many surprises at meetings when it comes to topics that come under discussion.

From my perspective, one of the most useful parts of the meetings is when various town officials can talk about projects they are working on. Topics could range from updates on efforts to improve baseball fields at the Joe Friel Sports Complex to renovations of the old firehouse to convert it into a Town Hall.

This kind of thing clearly is listed ahead of time on town board agendas released to the public as “Town board member’s/department manager’s/Nye County commissioners’ comments.”

But the AG’s staffer “made a point of saying he does not recommend having department head reports as an agenda item because of the possibility of board discussion,” Mulkerns said.

“We can’t have board discussion,” she continued. “We can leave it on there if we from this point forward say, ‘We’ll give our report, but there can’t be discussion about what we are talking about unless it comes back (later) as an agenda (item).’ You could say, ‘I’d like to see that on the agenda so we can discuss it.’ That was the impression that I got.”

“That immediately came to my head,” Mulkerns said. “Because we’ve had this time on the agenda where we’ve had some pretty lengthy discussions depending on what we’re talking about.”

One suggestion was that that kind of updates might be submitted in writing in time for the meeting or listed as specific items on the town board meeting agenda.

In some cases, that could mean bumping that information to the next meeting so that the public gets proper notice on an agenda of what’s planned. Since the board meets only twice a month, a delay could span a few weeks in terms of getting the information out.

It also may open the possibility of citizens expressing concerns to the town board at one meeting but having to return at a later date for town board answers — if board members are not allowed to discuss issues until they are specifically placed on an agenda in advance.

Mulkerns plans to follow up with the AG’s office for further clarification.

And when it comes to comments from the public?

During two separate portions of the meeting, people currently are allotted three minutes each to talk about matters on or off the agenda. That is not changing.

But the town board is being told that it no longer can allow crowd members to give their three minutes to others, extending the speaking time for someone who is running out of allotted speaking time.

In short, town officials are being told the minutes no longer are transferable from one person to another.

As it stands, that does not happen very often. But during contentious items such last year’s annexation proposal, for example, individuals gave their speaking time to others so that they had a greater opportunity to explain their points. This allows for someone to serve as a group spokesman or spokeswoman and speak at length on a topic that needs some explaining.

And under the public comment agenda portions “when the public comes to talk about whatever they are talking about, technically, you guys cannot say anything, except ‘Thank you for your comments,’” Mulkerns told the board. “That’s it.”

Town board chairman Duane Downing said, “If the AG’s attorney is saying ‘Don’t do this,’ I’m going to take that advice.”

An option would be “a recommendation that this needs to be an agenda item,” Downing said of potential issues being brought to the town board’s attention.

“My suggestion would be if there’s anything large or significant that you guys (town staff) want to report on, let’s just list it as an agenda item from this point forward,” he said.

Town board member Roni Link had wanted to discuss concerns about how the Jan. 5 power outage in town had affected senior citizens.

Before Jan. 25, a free-flowing town board discussion and action plan likely would have followed. Now, Link will have to wait until the next meeting, set for Feb. 8, so the information can be placed on the agenda.

We’ll have to wait and watch. Stay tuned.