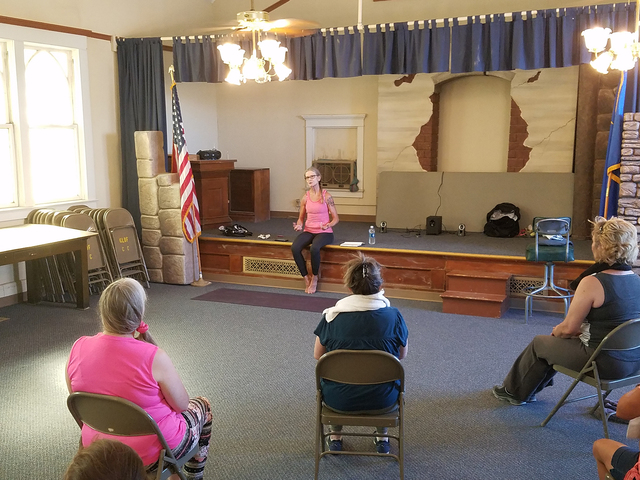 When it comes to fitness, there’s quite a movement underway in the Goldfield community.

A “Wellness Wednesday” fitness program debuted about a month ago, followed a short time later by the addition of a “Tone it up Tuesday” effort.

Both are held in the Goldfield Community Center and spearheaded by Jody McKenzie Davarpanah, a Goldfield resident.

Davarpanah said she is trying to be proactive when it comes to wellness issues.

“We already have a problem with health care,” she said. “So I’m just kind of doing an umbrella over folks and saying, ‘You know what? Come out and be well.’”

It’s also about “doing something positive for yourself,” Davarpanah said.

“A lot of times, and in Tonopah, too, a lot of people they think there’s nothing to do and that kind of stuff,” she said. “I want them to know there’s something to do.”

On Facebook and in fliers around Goldfield, Davarpanah’s been promoting details of the fitness programs.

“Wellness Wednesday” features a free fitness program from 4 p.m. to 4:30 p.m. for those 16 and older. The 15 minutes that follows is for cooling down, rehydrating and visiting with fellow participants. The program started Aug. 31. By mid-September, it already was averaging 12 people.

Yoga instructor/coach Nancy DeLuca of Goldfield spoke of why she got involved.

“I just thought this was something to give back to the community,” she said. “I do study yoga, which is what we are doing this evening.”

DeLuca moved to Goldfield earlier this year from upstate New York to be closer to her mother.

“I do a lot of walking out in the desert and (bicycle) riding …and I don’t see a lot of people outside,” DeLuca said.

“It’s such a beautiful area. They need to enjoy it, get a little more active. It helps with health,” she added. “Health care is pretty far away. You need to stay healthy.”

The closest hospital to Goldfield closed in 2015 when Nye Regional Medical Center shut down in Tonopah.

With “Wellness Wednesday” DeLuca noted the importance of the 15-minute cooldown/refreshment session following the yoga.

“It’s just to get people together, which is nice,” she said. “So it’s like a positive bonding for people …It’s a more positive aura brought to the community.”

“I am actually looking forward to expanding it,” she said. “Wellness Wednesday is great, but I would like to kick it (into) another night, bring it up even more.”

Arnold got her wish for more fitness efforts.

The community’s latest program — “Tone it up Tuesday” — “is taking fitness in Goldfield to the next level,” Davarpanah said on Facebook.

“Be ready for a boot camp-style class with 40 seconds of work and 10 seconds of recovery. The class is 45 minutes of moderate intensity-level training involving cardio and callisthenic exercise. Boot camp is the most effective way to burn fat, get strong and have fun.”

Those sessions, also free, start at 6 p.m. Tuesdays in the Goldfield Community Center for those 16 and older.

Also, volleyball is being added on Monday and Friday evenings in the Goldfield Elementary School gymnasium, Davarpanah said Oct. 3.

She’s hopeful the fitness effort could lead to other activities in Goldfield and beyond.

“If you like to read books, make a book club,” she said in a September interview. “If you have little kids, read to the little kids at the library, make it a big deal.”

An aim is people focusing on things they enjoy and sharing it with others in their community.

“My whole thing was to inspire other people to do something for a positive action,” Davarpanah said. “I’m hoping what it will do is be like a little pebble that ripples over to other communities.”

Those with questions on the fitness programs can check Facebook or contact Davarpanah at the Elite Trading Post, which she runs with her husband, Malek, in Goldfield. The number is 775-485-3560.