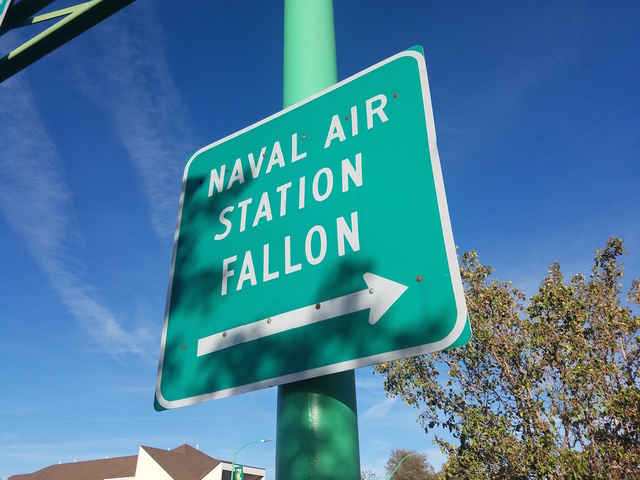 A sign as shown in this Oct. 6 photo points to Naval Air Station Fallon where its training range may expand into Nye County. Congress is to make the decision ultimately. David Jacobs/Times-Bonanza & Goldfield News

The more I delve into a plan that would bring the Navy to Nye County, the more prestigious it sounds if our county is added to the Fallon Range Training Complex.

As planning continues for what would be a massive expansion into Nye County, a Navy official tells me the training complex is “critical” to U.S. military readiness.

“It’s by far and away the most important training range for Naval aviation,” said Alex Stone, Navy project manager with the U.S. Pacific Fleet.

The entire fleet of American aircraft carriers has ties to the Fallon range, which would be extended into Nye County if Congress ultimately approves the plan.

“The Navy has 11 aircraft carriers on both coasts (Atlantic and Pacific) and deployed throughout the world,” Stone said.

“Every single (carrier) air wing comes to Fallon to train. The pilots have to learn to land on the carrier, but really where they do their actual training on how to drop bombs, air-to-air (combat) and fight against surface-to-air missiles is at Fallon for the entire Navy.”

“There is no East Coast equivalent of Fallon,” Stone said. “It’s really here where we bring all the air wings. We bring not just the pilots and the airplanes but the sailors who load the bombs, maintain the planes.”

“So when they arrive in Fallon, it’s almost like they’re going to the aircraft carrier,” Stone said. “They practice it just the same way, the same tempo, so it’s really the most advanced training that we provide for naval aviation. It’s all done here at Fallon.”

Naval Air Station Fallon, about 65 miles east of Reno, serves as the hub for the Navy’s training range.

The Navy is pressing for a plan that would more than triple the Fallon Range Training Complex into Nye County.

Besides renewing its existing arrangement for 202,859 acres, the Navy seeks another 604,789 acres of public land for military use to expand the existing range. The Navy also wants to acquire another 65,160 acres of non-federal land.

The Navy plan is separate and unrelated to an Air Force expansion plan elsewhere in Nevada, though both services cite improved technology as the need for more room.

“What’s happened over the years is our weapons are released from a much higher altitude and farther away from the target,” Stone, of the Navy said. “So a generation ago we would be able to fly right in and drop the weapon. Now we don’t actually use the weapons in combat like that.”

Because the range has not been expanded, Navy pilots “have to go out there and do a very canned and very unrealistic type of training mission when they’re doing their weapons delivery,” Stone said.

Through expansion of the Fallon range, the Navy would get “much more realistic training,” he said. “That really leads to our pilots being better prepared when they’re deployed.”

Navy SEALs train at the facility, which also is home to the Top Gun school (think Tom Cruise and the 1986 movie).

Ranges at the Fallon complex haven’t really been modernized since the 1990s, Stone said. “So the technology and the tactics we need to train to today have really exceeded the land that we have,” he said.

The Fallon range is valued at $1.4 billion and employs about 2,800 including military, civilians and contractors.

Moving it to another location is “not an alternative we would really analyze,” Stone said.

“We really don’t have another place where the training could be moved,” he added. “There’s really not a realistic option that would have us no longer training here.”

■ A decision on the Navy’s expansion proposal is not expected until around 2021, pending actions such as an environmental review, review of public comments, further public meetings and congressional action.

■ See the Tonopah Times-Bonanza & Goldfield News for upcoming stories, looking at what the Navy is saying about environmental concerns and land issues that could affect ranching and more.

■ See the Facebook page of the Times-Bonanza for more photos from the Navy’s plan presented in Gabbs.